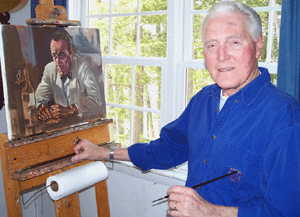 I hate waking up to such news as it always depresses me even more, but Frank Springer has passed away. According to his friend, Jeff Jaworski, Frank had been in ill health with prostate cancer for a while and had been hospitalised since February of this year. He slipped away peacefully on Thursday at his home. I only spoke to Frank once, when I interviewed him, on his birthday of all times, back on December 6th, 2007. Ironically, although I wasn't aware of it at the time, that was his birthday, so I sent over a nice little present both as a thank you and as a happy birthday. Frank was very giving of his time and I'm damn happy to have been able to have had the opportunity to speak to Frank, even if only for a few hours and let him know how much I appreciated his work way back when, especially his inking over Frank Robbins.

Frank will be missed.

Frank Springers family have requested that, in lieu of flowers, donations in his memory can be made to the DC-MD-VA Chapter of the Amyotrophic Lateral Sclerosis Association, 7507 Standish Place, Rockville, MD 20855