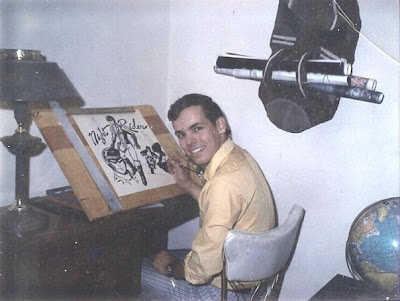 This has been a horrid week for everyone - God knows why it's all hit at once, but it has and we have to deal with it. For those who aren't aware, this is the latest medical update from Dave Simons, as posted on his Dave Simons Appreciation page on Facebook.

"I got out of the Brooklyn V.A. Hospital recently. Overall, I'm very happy with the service they gave me. The Brooklyn VA might be even a bit nicer than the Manhattan VA, if possible.

"Many tests were done--CAT scans, blood tests, MRI, and of course blood pressure every five minutes.

"After about six days, it seemed that they had enough data to put together a picture. I am most definitely in stage 4, which is incurable. The best that can be done is to retard the advance of the cancer by use of radiation. Later chemotherapy will be used.

"The doctor also gave me 6-12 months to live. This, however, is not graven in adamantium. Its more like an average, and there's no reason why I couldn't be the one to skew their average by living for years.

"I once had a friend named Slappy, a jazz musician who hung out in Greenwich Village. He'd served in WW II. For many of the crowd at the 55 Bar, he was our own 'Bleeding Gums Murphy'. Slappy got the same '6 months' from the VA that I did--about six YEARS before I met him! I knew him for about another 10. He just hung in there by having a lot of friends and digging his music.

"Substitute comic art for jazz and I can do pretty much the same thing.

"I am getting back to work this week and remaining as active as possible. It may be a good bit before I can put in an 8-hour day again. One of the major side effects of radiation is fatigue and I'm currently getting radiation 5 days a week. I deeply appreciate everything that you have all done for me both in terms of financial and emotional support."

As to be expected Dave is remaining fairly upbeat with this news and has asked that if anyone wishes to ask him a question, or generally just shoot the breeze, then pop on over to Facebook and fire away. In the meantime people can donate to Dave, via PayPal or by sending items to be auctioned on eBay. You can find all the relevant information by clicking this link. Personally I hope the doctors are wrong and that Dave lives for another 80 years - now that'd be something to look forward to.