Being For The Benefit Of Mr Colan... 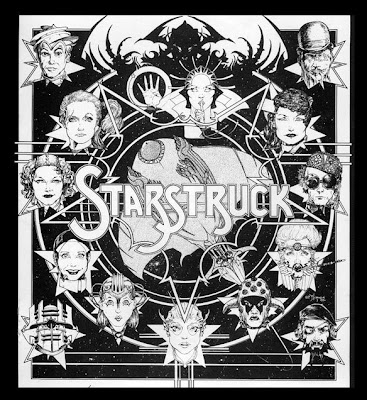 On August 15, 2009, the off-Broadway science-fiction comedy StarStruck by Elaine Lee, Susan Norfleet Lee, and Dale Place, basis for the 1980’s comic book series by Elaine Lee and Michael Wm. Kaluta (who provided set and costume designs for the original production), will be presented for the first time in 25 years as an audio theatre-style live reading at the famed Henry Miller Library in Big Sur, CA.

Proceeds will help pay the medical bills of comics legend Gene Colan, the bills stemming from his bout with liver failure in 2007 and 2008. Colan is best known for his distinctive artwork on such titles as Iron Man, Daredevil, Batman, and Tomb of Dracula (from which the character Blade was introduced).

The reading will employ pre-recorded sound effects and live effects performed by a team of foley artists, coupled with composer Dwight Dixon’s music from the original production. The evening will be MC'ed by Steve Kane, the "rock and roll doctor" of the original community-supported KAZU FM.

Play it by Ear Productions, an audio theatre company in Pacific Grove, CA, will produce the event under the direction of Producing Director Lance Roger Axt. “I’m absolutely ecstatic that this is finally going to happen; speaking as both a longtime comics fan and a theatre artist, I’ve wanted to do something with this play for over a decade. And helping Gene and Adrienne Colan is an added bonus; they are two great people, and I’m more than happy to lend a hand.”

The performance also serves a second purpose: to test the timing of the piece before a live audience, which will ultimately serve a subsequent studio recording.

A StarStruck radio series is in development!

The first piece will be an audio adaptation of the off-Broadway comedy, to be recorded in Maine. The series will be produced by the new AudioComics production company (Axt, Dan Bernard, and the voice of 'Bob the Builder,' William Dufris), who will be working directly with Lee and Kaluta on both the adaptation and on several new StarStruck pieces written specifically for the medium of audio.