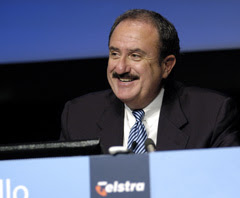 Why is the man in this post smiling? Because he's never had to deal with the complaints department, or rather, lack of a complaints department, at the company that he's now stepping down from. That's right, cut to the chase, Sol Trujillo has quit Telstra and has been handed a package that should see him earn over $20,000,000, at least, just to walk away. And for what?

Outsourcing the call centre to India. I'm not knocking India as a nation, but damn it's hard to speak to someone who doesn't understand a word you're saying.

For having a call centre that cuts people off as they 'transfer' them to another department.

And, best yet, for not having a complaints department. That's right, if you wish to complain about a service or an employee you can't do it, unless you put your concerns in writing, and even then you'll have to wait for several weeks, if you're lucky, to hear that nothing has happened.

Today I rang Telstra to enquire about my mobile broadband account - it's been disconnected, again. Now this is a regular event because it seems that no-one at Telstra can get my mailing address correct. It appears that no-one can spell the name of my street right and as such they keep inserting the letter 'o' where the letter 'u' should be. It's that simple yet for the past twelve months it's been that difficult. As a result I don't get bills, or they arrive months late, forcing me into payment plans.

I've spent an hour on the phone trying to sort this out today. People admit it's not my fault as it's not my mistake, but they refuse to reconnect me, even with a payment plan. Today it got worse. The female I spoke to began to abuse me in a very patronising manner when I asked as why, if the error is at Telstra's end, why could I not be reconnected. I did request that she stop and asked to be put through to her supervisor. She chuckled and put me through to....the mobile phone section, who were also bemused, chuckled at my bewilderment and simply hung up on me.

No resolution. After an hour of waiting and speaking to idiots.

I phoned back. "Sorry, we don't actually have a complaints department," I was told. Give the man I spoke to his due, he admitted that it was slightly insane that all complaints have to be in writing, meaning that there can be no instant resolution. I was told that all that was likely to happen is that the people involved would be told to be more careful in the future. Good on 'em. Thus you cannot lodge a formal complaint against the major phone and internet carrier in Australia by any means other than normal mail. That's trailblazing for you.

Telstra have lost my custom as a mobile broadband user and, as I told the guy I spoke to last, I'll be telling everyone to avoid them like the lepers they are. So, avoid them. Don't use them. Go elsewhere. I despise bad customer service. I've never given bad customer service and I expect a decent standard of customer service, especially when I'm PAYING for the service. I don't expect to be abused or patronised. Sol doesn't care, in fact I doubt anyone at Telstra cares that one person is so unhappy with the service that they'll leave. No skin of their noses. But then the stock price is dropping, so perhaps...just perhaps.