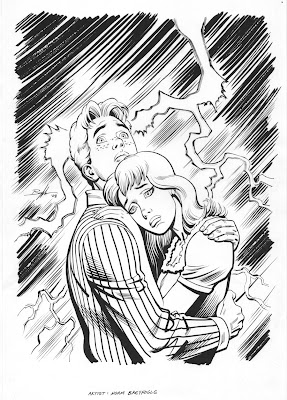 He’s drawn almost every icon that exists in comic books, from Superman to Batman to Spider-Man to Captain America, and now Norm Breyfogle is tackling yet another cultural icon: Archie. Archie, Jughead, Moose, Reggie, Betty and Veronica and company have seen a lot of talented artists drawing their adventures since their debut in Pep Comics in 1941. Artists the calibre of Dan DeCarlo, Stan Goldberg, Harry Lucey, Dan Parent, Al Hartley and Henry Scarepelli through to Gene Colan, Joe Staton, Bob Smith, Chic Stone, Al Milgrom and Mike Esposito, have all left their mark on Archie but rarely has there been a more "realistic" artist's style depicting Riverdale. 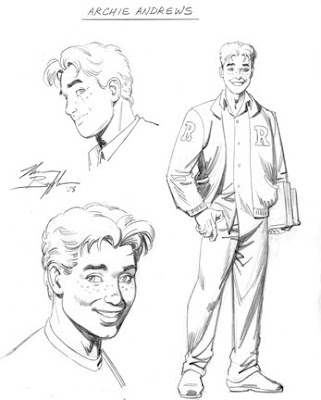 In a bold and daring move for the stylistic Breyfogle, he’s just wrapped up pencilling and inking the first issue in a four issue run on the ‘Archie’s New Look’ series. The concept behind the ‘Archie’s New Look’ series involves stories that are more realistic than the traditional Archie comic book; hence artists are encouraged to draw in a more ‘non-traditional’ style than would generally appear in the standard Archie books. 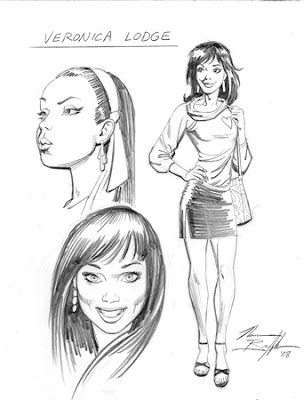 Norm Breyfogle is best known for his ground breaking and highly influential run on Batman. Working together with writer Alan Grant, Norm’s run featured some of the most dynamic renditions of the character in the past three decades. Norm has also drawn virtually every DC character there is, along with a host of Marvel icons, over the past twenty five years. He also co-created the tragically ignored ‘Prime’ for Malibu along with his own Metaphysique, and has worked on titles such as Of Bitter Souls, The Dangers Dozen and Black Tide for a number of publishers over the past few years. “I like drawing comics,” replied Norm when asked how did his involvement with Archie come about. “I'd met my Archie editor Mike Pellerito at a NYC comic convention when, as I was talking with Joe Staton about his own Archie work, Mike walked over and we were introduced. A few months later he called and asked me if I'd like to do some work for them. It was perfect timing, as my work for A First Salvo had just come to a close.”

“Norm has been one of my favorite artists for a long time,” says Archie editor Mike Pellerito. “At this past NY Comic Con he was talking to Joe Staton and I was introduced though Joe. At the time Joe was working on another of our NEW LOOK Projects, Jughead- The Matchmakers which ran in Jughead’s Double Digest #139-142, and he casually mentioned that Norm should be the artist for the next New Look project.

“In all honesty, just standing in the middle of a conversation between of two of my favorite comic book artists was cool enough but to get to work with them is the real treat.

“Norm’s art has always been eye catching, so that was the big draw. Other than a short conversation and a few phone calls we didn’t know each other. With those conversations he came across friendly and very professional and we progressed from there. With Norm the art speaks for itself.”

Considering Norm’s past history as an action/superhero artist and his established dramatic style, one could easily expect to see a radical difference in style between Archie and a character such as Batman but this clearly wasn’t the case. “My style is pretty naturalistic and adapts well to many genres,” says Norm, “and since this is Archie's "New Look," I'm free to use my own style, rather than aping the traditional Archie drawing style. At first I considered doing a cross between my typical style and the traditional Archie style, but I realized early that there was no need for that, and if this is meant to be a new look, why not go all the way? 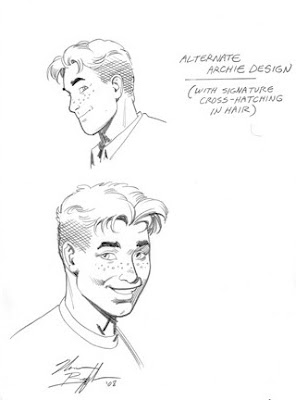 “The reason we chose Norm is why we tried this series in the first place,” says Mike, “everyone always wanted to see what Archie and the gang would look like if they were “real”. With the New Look series we have been giving the Archie family of characters a realistic style but also telling stories with a bit more heart and not such a silly tone as the regular Archie stories. Artist like Norm, real storytellers can give the readers a great experience with these romantic comic stories.”

“As far as preparation goes,” Norm continued, “I did pencil sketches of all of the main characters first, and gathered a bunch of reference in the form of teen magazines and whatnot. I drew two different versions of Archie, one with the cross-hatching on his hair and one without, and let my editor Mike Pellerito decide to go without the cross-hatching. I've always known that drawing pretty women and children/teens is the hardest thing for a comics artist to master, but I sometimes forget. This job has reminded me of that fact. I remember how, as an amateur artist writing and drawing my own stories, I would always kind of rush through the talking heads parts, impatiently wanting to get to the action scenes. I could draw muscles/anatomy better than anything else first, for the same reason. I guess my ability to really enjoy drawing Archie is an indication of my professionalism, in that I enjoy drawing *everything* now.”

The idea of tackling such a diverse and new subject matter is one that Norm has clearly relished. Despite a long career drawing diverse characters and working for several publishers, Norm has never drawn in the Archie style; however the future does hold promise. “The closest I ever came to that (drawing Archie style) was when I drew "Bob Violence" for First Comics twenty years ago,” says Norm, “but even that was quite a bit different. Sure, I guess I'd give drawing a more traditional Archie a shot. More than likely, however, I'll be doing some "Sonic the Hedgehog" for Archie Comic Publications.” As for the possibility of Norm writing a story set in Riverdale down the track, “Oh, boy, would it ever NOT be the Archie our parents knew! Knowing me, I'd raise deep, not resolvable, philosophical questions. But no, I'd not want to write Archie. I've got no experience writing others' characters; all my writing has been my own perfectly free expression, and that's what I want it to remain ... not to mention that Archie hasn't solicited my writing, anyway.” 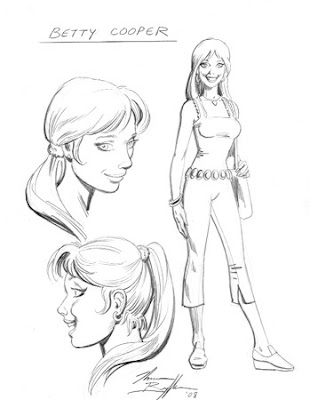 So what character was the most challenging to draw? “Jughead was the most fun and the easiest one for me to draw,” says Norm “the girls are the toughest. By the way, my answer to the age-old question? Betty.”

While not able to give out any details of the plot, I am led to believe that the story is quite touching and not the standard Archie fare. “So far we are 4 covers and most of the first issue into it,” added Mike Pellerito, “and the art speaks for itself. Just gorgeous art and great story telling. One thing, not sure if people will find this interesting, but most pencillers don’t usually have a great ink line but Norm really is a good inker not just a great penciller.

“The immediate future is three more issues to finish the story arc, which starts in Archie Double Digest #200. After that Norm has already expressed interest in doing more with Archie. We kicked around doing some work on Sonic the Hedgehog, he is great at the action adventure stuff too, not just pretty girls. And certainly anything Norm wants to do would be ok with me with the way these pages of “Archie - Goodbye Forever” are turning out!” 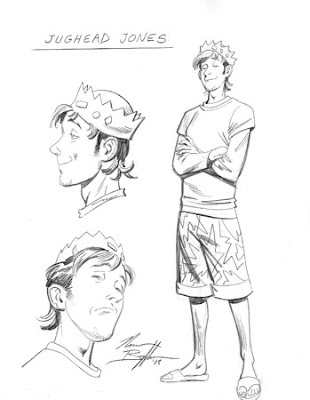 Considering Norms previous artistic history the most obvious question has to be asked: is there any chance of an Archie v Batman comic on the horizon. “That WOULD be fun! And, of course, it would be up to Archie Comic Publications and DC Comics,” says Norm, “I actually think that would be a great idea. And why not? Betty and Veronica made a pact with the Devil in a story from decades ago, and Batman is more family friendly than Satan!” It’s worth bearing in mind that, in the most unlikeliest of all teams ups, Archie did meet The Punisher back in the 1990s, as drawn by John Buscema and Stan Goldberg, so surely Archie meets the Batman shouldn't entirely out of the realms of possibility.