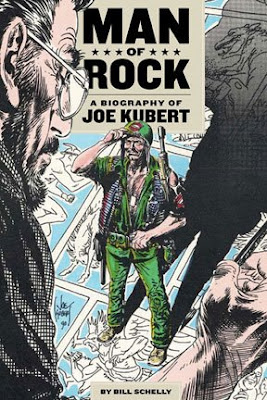 MAN OF ROCK - A BIOGRAPHY OF JOE KUBERT by BILL SCHELLY

As anyone knows I rarely do reviews - why? I don't get sent copies of books nor do I get paid for them, unlike some other web-sites you see that are dedicated to reviewing comics (the difference is they'll not tell you that Marvel, DC, Image etc etc send over books and a little cash on the side for someone telling the world that an item is worth reading). I do get asked to do reviews from time to time and I consider them carefully, but each and every review I do, unless I state otherwise, is because I like a book and I've gone out and bought it. Having said that I'll be damned if this isn't one of the best comic book biographies I've read since Bill Schelly's tome on Otto Binder. Schelly has a unique gift when it comes to writing these books, and that gift is showing the rest of us how these books should read. He's set the bar high with his previous volumes and this is no exception - it's a book that anyone and everyone who has even a passing interesting in what makes a comic book artist what they are needs to own and read.

Much like Jim Mooney, George Tuska and others Kubert was there at the birth of the modern comic book as we know it in the late 1930s. Kubert has since forged a career that has grown without him ever losing his touch, his art has evolved into the highly detailed, highly realistic style that is instantly recognisable - you know if something has been drawn by Kubert even without seeing the credits. Snaffled up by DC early in his career he became the defining artists for many of their war titles, but, oddly enough, he didn't touch the superhero titles all that much other than becoming the definitive artist for Hawkman, but then, as has already been noted, once Joe worked on a title his work was definitive from then onwards.

With brilliant descriptions of the working environment at DC, Kuberts own Joe Kubert School Of Cartooning (formed in the late 1970s and still going strong) and Kubert's own personal works of recent years, this is a book which the highest recommendation really isn't enough. If there's a flaw, and like all books there is, it's the lack of colour images, but other than that this book once again sets the benchmark that other biographers (and I include myself in this) should reach but never will. Forget the over sized glossy books that have more to do with reprinting images than actual content, forget the hardcovers that are all surface gloss and no substance, this volume is the real deal and what biographies of comic book artists should read like - entertaining, authoritative and rich in content.

Go and buy one today - comic book shops should have copies, if not then buy one direct from Bill, just get it, read it and I assure you, you'll enjoy it.

Anonymous said…
Dan, You couldn't be more correct about this book it is superb. I am sold on the Binder book after reading this, and will have to pick it up. Pat Ford
Monday, November 10, 2008 3:33:00 pm

Tim said…
I met Joe back in the mid seventies at the Detroit Triple Fan Fare Comic Convention that was at the time being ran by Greg Theakston.
Mike Nasser was also there. Joe had just started up his school and was pushing it then.

He is probably my favorite comics artist, even a better Tarzan artist than Frazetta himself, and Sgt. Rock is in my opinion, the only war comic that was ever worth looking at. He defined the genre and no one has even come close.
Neal Adams is often lauded as the best comics artist ever, but he is a far second place to Joe Kubert, the true best comics artist ever. I challenge anybody to disagree.
Tuesday, November 11, 2008 3:04:00 pm