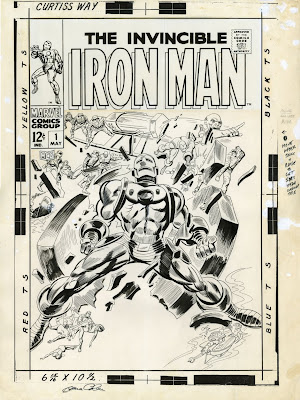 If art like this still exists, and it does, then why does Marvel insist on having artists redraw and retouch art for inclusion in both their Masterworks line and now the Essentials? 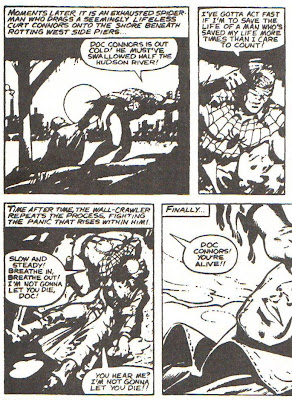 Essentials you say? Indeed. I've been critical of the Essential line after buying a copy of Peter Parker #2 and finding some of the pages to be very lacking in quality, indeed they appeared to be poor quality, eighth generation photocopies, such as the panels shown here. At the time I approached Marvel editor Tom Brevoort to discuss the varying quality of the Essential line and was given this reply as an explanation, " In the case of the SPECTACULAR SPIDEY volume, the stats for those stories were either in horrible condition, or lost or discarded over the years. I've detailed in the past how maintenance of the reproduction warehouse wasn't anything resembling a priority during the bankruptcy years; stuff like this is the inevitable result years later." Fair points. Tom also explained that DC, unlike Marvel, actually shot their film from actual comics books, hence the DC Showcase series looked fairly clear in comparison to the Marvel Essentials, but Marvel were not prepared to go down this road.

Tom then followed up his comments with this claim, "The Essentials are meant to be big, think reading tomes, not archival collections--and their affordable cover price means that there's less money in the budget for extensive restoration work." That might have been true back in 2006, but in 2008 the attitude has clearly changed.

Shown here is the credit box from The Essential Dr Strange Volume #1, first printing. You'll notice that it's a fairly generic credit box, listing the staffers at Marvel at the time and the new colour artist, Tommy Chu, being about the only person who 'touched' any of the art. 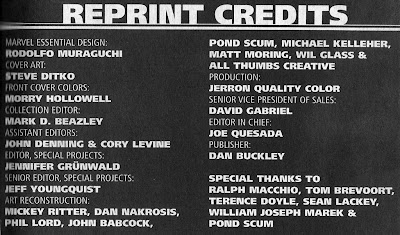 Now look at the credit box for the newest printing of the same book. In this book you'll see many of the names that we know now to be the 'creative' crew that Marvel keep on the books to redraw art, touch up faded art and basically, in some cases, trace existing art to pass off as original. Even poor Tommy Chu's work has been redone. So where you once bought an Essential thinking that that least these phone book black and white volumes were reproductions of the original art, albeit in stat or published form, now there's a Masterworks sized cloud hanging over them. Are they reproductions of the original artists work, or mere recreations done by an artist who never worked on the original. Again Marvel is doing a great dis-service by not stating what art is by the original artists and what has been recreated by an artist working for them today. Again, it wouldn't be too much to ask that Marvel either include the percentage of art that has been redrawn/recreated for these volumes or include a disclaimer stating that these books contain art based upon the original artists visions. Would people still buy them? Of course. Then what would the difference be? People would then be able to make an informed decision before they hand over the cash.

People aren't that protective about scanning their art and supplying it to the companies for the purposes of publication - hell I did it recently with a Gene Colan story and if DC ever knock on the door then I'll be more than happy to supply high quality scans of my Breyfogle art. The only people who won't are those who've obtained art under dubious circumstances, but that's a whole new kettle of carp.

I guess now I'll keep looking and if the usual suspects turn up in the credit box then I'll be placing the book back on the shelves as I can't trust the veracity of the credits given in the stories contained inside. Such a shame really.

Anonymous said…
Keep in mind, the fact that it exists means almost nothing if this hasn't been brought to the attention of the appropriate people working on reprint collections.

To be fair, a few people there *have* been making an effort to find these pieces of original art. But there's only so much they can do, and they're entirely dependent on the generosity of collectors -- a situation made all the more difficult because Marvel won't even grant a single comp copy to people who contribute!
Wednesday, November 05, 2008 11:27:00 pm

Daniel Best said…
Well this is it isn't it? It would appear that some at Marvel do actually make an effort to hunt this stuff down - hence they contacting me and Michael Baluderstone here to scan a complete Colan story for print, but at other times they clearly find it easier to get one of the new guys to just trace the art and bang it out there under the guise of it being original. I have several stats plus a pile of reprint books with some of the clearest B&W images you're likely to see - they could be easily scanned and recoloured and used, but Marvel won't make the effort to ask. And ask is all they need to do - I'd scan and send them, on time, as would hundreds of others.

The comp copies don't bother me at all. I'd much rather see the original work out there as opposed to a copy done by an artist who's only talent lies in tracing artists far better than they are.
Thursday, November 06, 2008 6:16:00 am