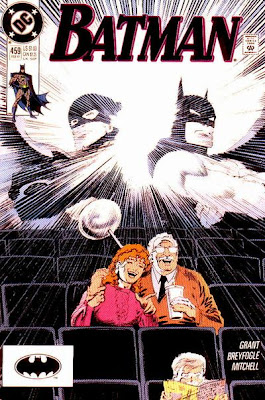 I'll freely admit that this kind of stuff fascinates me no end, so, hopefully, it'll be of interest to other people out there. Recently I managed to buy a cache of Norm Breyfogle art quite unlike any other lot. This art had been stored since publication and to my knowledge had never been offered for sale since sometime in the early 1990s, some of the art had never previously been on the market at all, such was the scarcity of it all. It was all offered to me, we negotiated a price for the entire collection, I paid a decent sum and now own it. I ran it past Norm at the time and he was more than happy with me purchasing the art, so no problems there.

One of the packages in the lot was probably the only existing example of thumbnails for Norm Breyfogle's Batman run. I say this with a certain amount of authority as Norm has told me more than once that he threw away what he believed were all of his preliminaries, scripts and notes for his Batman and Detective Comics runs back in the late 1990s. I suspect that this lot managed to escape that purge due to it being stored elsewhere. Sadly all that remains are the scripts and preliminary art for Batman #459, titled Saturday Night At The Movies, along with two cover sketches for the follow-up issue, Batman #460. I do also own the preliminaries and scripts to Batman: Dreamland and Batman: Abduction as well, but as they're stand alone one-shots and not part of the Alan Grant/Norm Breyfogle Batman run they kind of don't count, as brilliant as they are. What grabbed me in particular was the inclusion of a sketch by writer Alan Grant(!) which makes for a very interesting study into the progression of a splash page, from script to concept to final product. 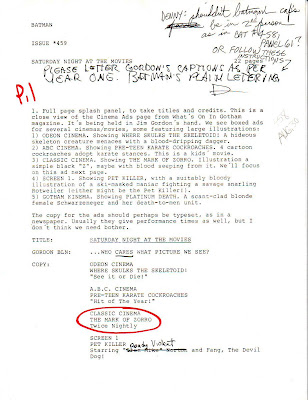 What we have here is the first two pages of the Alan Grant script. There's a lot of detail in these two pages. These pages, written by Grant, bear hand-written notes from both Breyfogle and editor Denny O'Neil. Norm has a tendency to write notes both to himself and to his writers/editors on his scripts, along with sketches, ideas and annotations. Indeed the script for Batman: Dreamland has all of the above, plus pages of notes that were faxed to Alan Grant with sketch designs for weapons in Batman's hands.

The second page of the script finishes the description for the splash. You may wish to enlarge the pages to fully appreciate what you're reading. Studying Grant's script has given me a better understanding of what is required, detail wise, when putting together a comic book. Grant trusted Breyfogle and vice-versa when it came to these issues, and this script helps show to what level. 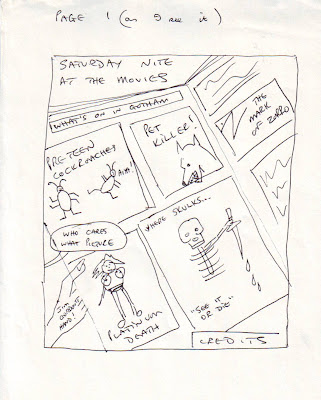 This is Alan Grant's sketch. This was included so Norm could get a rough idea of how Grant envisioned the splash page ultimately looking like. Although the final product wouldn't look anything like this, this crude sketch did serve to provide Breyfogle with a sense of design and lay-out. And how many Alan Grant sketches have you seen in your days? According to Norm this wasn't the standard way that the pair worked and Grant would rarely provide such sketches, clearly he had a vision of the splash that he wanted to impart to Norm. 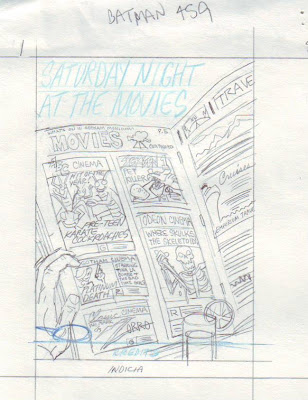 From the script and Grant's design sketch, Breyfogle then went on to do his own rough pencil preliminary art. These preliminaries were amongst the most exciting part of the entire package, as they show an artist at his most purest. Preliminaries are generally some of the most interesting pieces of art that an artist produces. Jim Mooney's preliminaries always exhibited a speed and violence that, as great an artist that Jim was, wasn't always present in his final product, especially if he was inked by another artist. The same applies here with Breyfogle's preliminaries.

What is also interesting about Norm's preliminaries is that they are, at times, virtually full pencils. Initially Norm did his preliminaries to work out pacing, fix any potential problems and the like, once they were done he'd then redraw the pages into full sized pencils. Once Norm began to ink his own work he'd then draw grid lines on the preliminaries and hire his brother, Kevin (also a talented artist in his own right) to enlarge the prelims into full pencils, which Norm would then ink. The next natural progression was Norm drawing his full pencils on A4 paper, which he would then enlarge and ink. I have several issues of books done in this fashion and it's always interesting to see subtle changes from the pencils to the final inks. 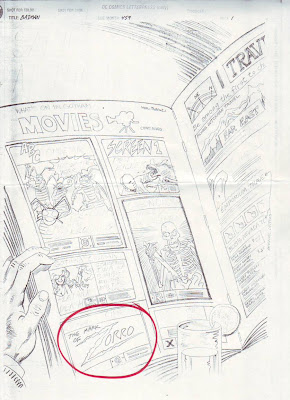 Here we have the splash page in final pencil form. You'll need to excuse the scan, this was taken from a reduced photocopy of the final penciled page. Again there's not much in the way of difference between the preliminary page and this penciled page. From here the page was approved and shipped off to inker Steve Mitchell. 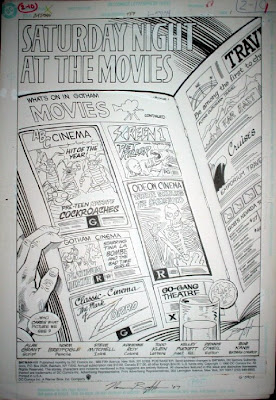 And the final inked page is presented here as it now looks. Mitchell was, and still is, one of the best inkers that has ever worked with Norm Breyfogle. Steve was assigned to Norm early in his Batman career and oversaw some of the best work that Norm did on both Batman and Detective. With this page you can easily see why. Mitchell was an inker of nuance and never attempted to overpower Norm's work with his own style. Inkers can do several things to pencil art, they can go to town on it and make it look like their own work, they can merely trace ever line or they can enhance the pencils and bring out the best in the pencil artist. The former rarely stay in business long, the second inker is a trained monkey and the last inker are amongst the best in the business and why inkers are just as vital to a successful comic book as the pencil artist. I've always said that a bad inker can make anyone look worse than they ever could be, a good inker can make art look good and an amazing inker can make anyone look great, but they can make the great artists look amazing. Steve Mitchell is an amazing inker and Norm was lucky to have him. Mitchell allowed Norm to develop into his own style and out his heart and soul into every issue. 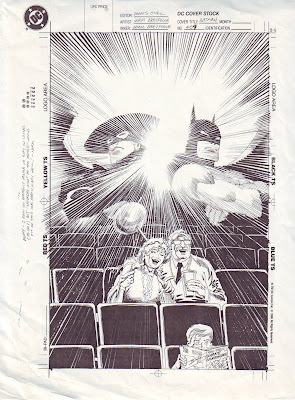 And that is how a splash page was designed. I've added the photocopy of the original cover art of this issue as well, just because I know people love that stuff. Now the question remains, why won't anyone hire these three giants to work on a monthly comic, or even a one-off. The thought of Alan Grant, Norm Breyfogle and Steve Mitchell again working on a Batman related book, or any title really, makes most people salivate, but for some reason no major company wants to know. Why? I know some of the reasons why, but I'll leave it to others to guess.