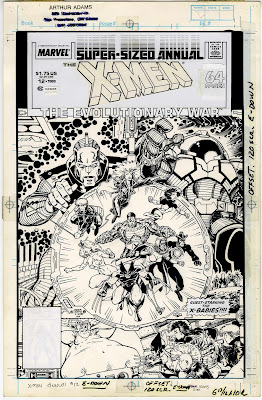 I'll be honest, I have no agenda in posting this cover other than I've always liked it. It's currently on the net for sale, but I can't recall where (if anyone knows feel free to post the link and I'll add it) and it's selling for around $9,999, that's $10,000 to anyone else. Good luck. I'd love to buy it and if I had a spare 10k hanging around I expect that I'd be very tempted indeed.

Arthur Adams has always been one of my favourite artists. I'm not sure what it is about his art that I like more, the detailed line-work, his ability to make the characters look normal (ie: no basketball sized breasts here) or just his general ability to draw other than merely swipe or trace photos from swimsuit magazines. When I first saw his work I thought Michael Golden, but he soon went beyond that and developed into a powerhouse which, I'll freely admit, is an acquired taste to most people. In a climate where the comic book industry are turning their backs more and more on established talent, Adams still manages to get work, even if he has to alter his style with subtle nuances and compromise himself ever so delicately in order to appear to be more 'modern'. The irony of all of that is that a lot of people do their best to look like Adams, but much like the other Adams, Neal, the more they try the worse they look. And when Adams (both Arthur and Neal) decide to pull the stops out they can make good artists look ordinary and ordinary artists look poor. Without the likes of Arthur Adams, along with artists such as Michael Golden and Don Newton (to name but two, the latter being probably the single most under-rated artist of the '70s and '80s) a lot of the artists you're seeing today wouldn't be where they are. Hey - Todd McFarlane owes his career to both the Adams's and Golden.

Long live Arthur Adams, and whoever owns that cover, you have my jealousy.

Hugo Rosales said…
I just wish Adams would do more, hell, I saw his name attached to an ad of that horrid looking Red Hulk book and I might pick it up just to support.
Monday, August 25, 2008 6:28:00 am