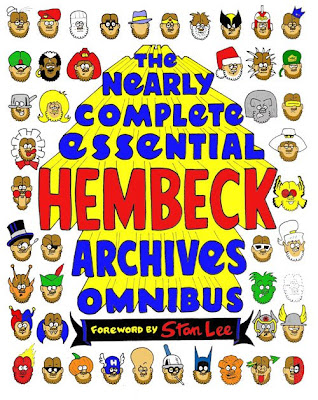 The Nearly Complete Essential Hembeck Archives Omnibus. Now that's a title. Ya know, even if I didn't like Fred Hembeck I'd still review this book. But I do like Fred - he's a class act and a damn good guy with a sense of humour that just doesn't stop. Well, perhaps it does stop. When he sleeps. Either way this is a pretty darned impressive volume indeed. My first reaction when I picked it up is, "Bugger me, it's a bloody phone book!" It's very similar to an Essential or a Showcase only it's heavy. And I mean, get a truck to carry it home heavy.

Fred informed the world a while back as to what this volume would contain and he wasn't just whistling dixie. It has virtually everything he's ever done, including the Fantaco books that came out in the early 1980s, cover to cover. Add to that almost anything and everything that Fred's done since, stuff you've always wanted to read again, stuff you're happy seeing for the first time and stuff that'll make you scratch your head and wonder what the heck is this and you're in for a riot of a read. 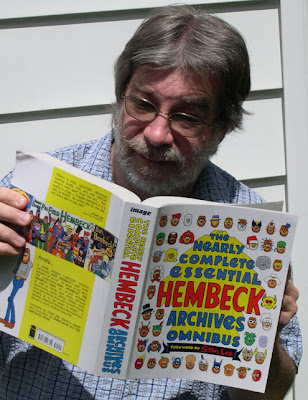 Now there's no way in the world that this can be read in one sitting. I devoted a good couple of hours to it last night while half watching the football and still didn't get anywhere close to completing it. I did make a serious dent in it though, and that's what counts. I'll admit I skimmed the Fantaco material, but that's because I've had those since they were issued, but I will get to them. The material I did read was both funny, interesting and, at times, very touching. The stories of Fred's youth and his development through his own eyes will resonate with almost anyone who grew up asking their parents for comic books. If you think you can find this stuff on Freds site then think again - he'd never have time to eat if he uploaded all of this, and frankly it'd cost you a far sight more than the cover price of this phone book - $24.95 - to buy all of the books, magazines and comics where this all appeared originally. I'm not going to give too much away but to say that if you like Fred and his unique take on the world of comic books then you'll love this. This is a true essential volume and frankly I couldn't recommend it highly enough. Go and buy it - you'll not regret it.

And nope, Fred hasn't bought this review. As I said, I'd be happy to say that even if he wasn't the nice guy that he is. Well done Fred - I eagerly await Volume II!