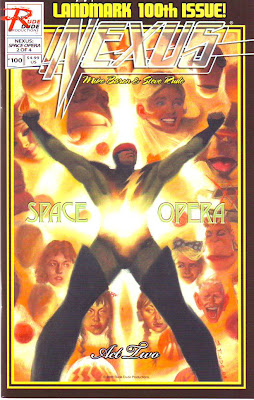 It's not often that a comic book comes out that genuinely excites me, especially in this day and age. Call me jaded all you want but the facts are that I've seen so much that mainstream comics just don't do it for me anymore. It's the little publishers that get the juices going, publishers like First Salvo and now Rude Dude. And with the latter it's this book in particular that's got me buzzing to anyone within earshot.

I've been waiting for this milestone for so long I've lost count of the years. Nexus has gone through too many publishers to think about and has a long and arduous journey to get to this point. Nexus first made it's debut back in 1981 and it's only now that issue #100 has hit the shelves, and that's down the drive and vision of one man alone - Steve Rude.

Not so long ago Steve Rude turned his back on the easy money that Marvel and DC would have gleefully thrown his way to draw their creations and turned his efforts towards bringing Nexus back from the dead (and Dark Horse). Reuniting with writer Mike Baron, Rude set himself a series of benchmarks and he's managed to hit them each and every time he's published a book. For the first time in his long and illustrious career he's gained complete control of both his creations and, more importantly, his work. By forming his own company, Rude Dude Productions, Rude has ensured that he can fully realise and see his projects through from start to finish - hence the even longer than expected delay on this issue. The book had been printed when Rude discovered that the reproduction didn't meet his expectations. At another company it might have been overlooked in the rush to get such a landmark issue out, but Rude decided to scrap the entire print run and go back to the publishers for a second bite at the cherry - the results can be seen with this 54 page monster of a book you should be holding in your hands.

What's in the book I can hear you ask? The lead story, naturally it's Nexus, as as good as anything I've seen over the years in this book. There's a secondary, fully painted Sundra Peale story (featuring a senator who bears a more than passing resemblance to a certain current Presidential candidate), along with a history of the book from conception through to today and a few other goodies besides. Seriously, you need to read this book.

I always had an idea that Rude would have such high standards. His artwork has always been without peer and when I spoke to him way back in 2006, after he first announced the launch of Rude Dude Productions he mentioned that the readers should keep their expectations of good quality product close to hand. He believed that he was going to, "to need a pretty solid report card from our readers for me to succeed." As far as I'm concerned Steve Rude has earned an A+ with this entry. A book well worth the wait, and then some.

Not only can you buy this book, and you should buy this book, but you can order a signed copy from The Dude himself. Do it- you'll not regret it. Now bring on the next 100!