The Spirit: The Australian Connection

August 13, 2007
Have you ever seen anything like it? Probably not. What can anyone say about Will Eisner's The Spirit that hasn't already been said? Eisner was a genius and each time I read The Spirit I'm blown away by the sheer scope of his vision. He was decades in front of almost anyone you'd care to mention and frankly no-one has come close to doing what he was doing back then. Since Eisner's untimely passing others have picked up the title, but, in my own opinion, the book is a pale shade of what it once was. I'm also not holding out any great hopes for the movie, as directed by Frank Miller. I can't think of anyone less qualified to direct a film of The Spirit than Miller, going on his latest work.

This little stunner was hiding in amongst a pile of Australian Gredown comics that I bought at Camberwell. It stands to reason that Gredown would have reprinted The Spirit, as Warren Magazines had also reprinted the title starting in 1974. Kenmure had the monolopy on Warren's titles, as they published the more mainstream titles such as Vampirella, Creepy and Eerie, leaving Gredown to fill the void with the lesser titles and the odd story here and there.

This one is a true find though. I have no idea who the cover artist is, but the painting is reprinted on the inside cover, sans logos, in glorious black and white. I also have no idea if more than one issue of this series was published, but then going on the looks and comments of both Spiros Xenos and Kevin Patrick, I'm hazarding a guess that before yesterday not that many people were aware of this particular title in the first place. 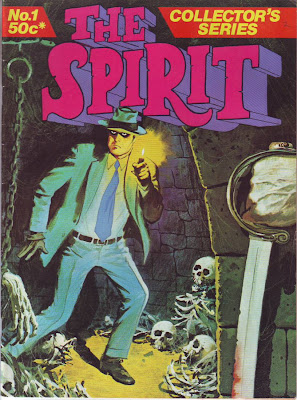 CONTENTS (all stories by Will Eisner with Jerry Grandenetti, John Spranger, Jules Fieffer, Andre LeBlanc and others):
Money: ? (not sure where this one appeared, or even if it's the proper title. It centres around P'Gell finding treasure at her school, it has a great battle scene with the Spirit)

The 'Pat' Hand: (again, not sure this is the proper title as I can't find details of it. The story has the Spirit going western to find treasure in the form of bags of gold dust)

These are the titles on the stories themselves. If nothing else it's a great book to have and I suspect that copies might start surfacing now that people know it's out there. As for me, well I had contact with Will Eisner once, and to be honest it's one of my greatest regrets. The interview I did with him wasn't anywhere near my best as it was done via email and they rarely work. Still I did correspond, via email, with Eisner for a shining second in time and that's something I'll always have.