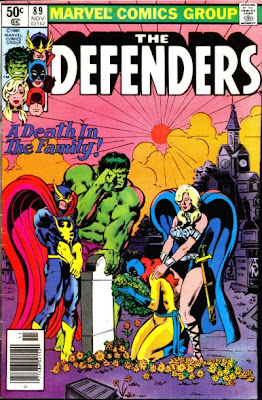 Out of all the stories I've been told from artists over the years this one still holds a special place in my heart, and, frankly, it's still one of the funniest. Back in 2003 I interviewed Don Perlin for my main web-site and he gave me the following story about he being the first person to use the word 'shit' in a mainstream comic book. At the time I was aware of profanity in comic books, via that famous Ka-Zar cover, but I wasn't aware that one of my favourite titles as a kid, The Defenders (the page in question is page 2 from issue #89), also had swearing within the pages. It might seem tame, especially when you consider that you can pick up comic books off the racks now to find language in them that'd make Richard Pryor blush, God bless his soul, but in the day it was shocking, flash forward to 2003 and it was just too damn amusing.

After Don had told me the story, and I wiped the tears of laughter from my eyes, he then told me that he believed that the page had been stolen, as you'll read. I was tickled pink to get an email this week from Bryan Galatis who told me that he had the page of original art in question and that it was now on display. Bryan had also thought that the page was stolen art, so he did the right thing and contacted Don to ask for sure, and to let him know that the page was rightfully his (Dons) if indeed it had been lifted. Thankfully for all concerned Don now believes that the issue had been split between penciler and inker, in this case Pablos Marcos, and that Pablo had received the page and then sold it on. So now Bryan has one of the unintentionally funniest pages that Marvel published in the 1980s.

So go ahead, read the snippet, the full interview can be found here, and enjoy looking at the original art, courtesy of Bryan.

DON PERLIN: I was the first guy, unwittingly, to put profanity in comics.

DP: No, it wasn’t the Kazar cover, what was that?

DB: Issue one of Kazar, back in the early 1970s, on the cover the artist had the trees in the background spelling the magic word. 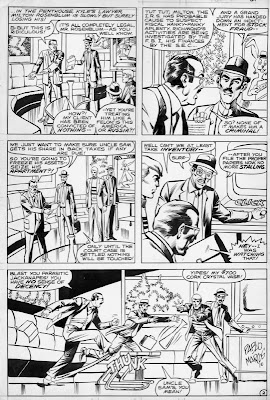 DP: This happened in one of the Defenders. There was a character in there who was a lawyer for the Defenders and his gimmick was that no matter where you saw him in his office, there had to be a TV set on - he was always watching TV. And while I was drawing one of the panels I was listening to a talk show and there was someone on telling how bad cereals for kids were - they were all loaded with sugar. So I drew a picture on the TV of a bunny rabbit holding a box of cereal and across the label where the name of the cereal would be I pencilled in 'shit'.

Anonymous said…
A very interesting tale of the TV rabbit. However, I had never heard of the Kazar cover. Can anyone direct me to the story behind the infamous F*** on the back of Zabu on Kazar #1?
Wednesday, May 14, 2008 7:13:00 am