Angus & Robertson: Boycott The Bastards & An Offer To Publishers 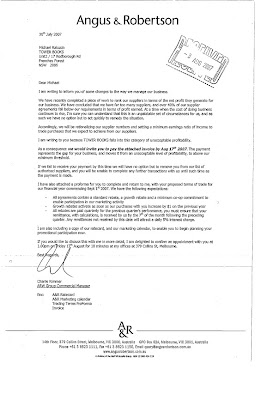 It's not often that I'll sit up and declare my intentions so publicly, but in this case I see no other option. For what it's worth I won't be buying another piece of product from the Angus & Robertson chain of bookstores. I'm well aware that by taking this stance I'll be punishing some small business owners (those who own and operate various franchises) but the recent decision of the company owners to send out letters of demand like the one opposite (you can read the text and the response here) makes my blood boil.

For those who aren't aware. The bean counters who run A&R have decided that small publishers will now have to pay for the privilege of having their books on sale in Angus & Robertson book stores. The profit that the stores and the chain make from those books aren't enough, they want more. What this does is squeeze a lot of independent publishers out of the market as some won't be able to afford to buy shelf space as opposed to promotional costs. It's pathetic. With more and more publishers than ever, thanks to the digital age, more and more product is out there to chose from. Shelf space is a premium, but let's be frank, how many times have you walked into a book store and found what you're after? It hardly ever happens to me, I order a good percentage of my books in (and anyone that knows me knows how much I read) and I can't help but wonder, will A&R decide to charge publishers for that as well?

I'll say right here, right now, that if A&R decide to keep this practice in place then they've lost me as a customer. They might not care all that much, in fact I doubt I'll even register on their collective radar as I'm just one person, however if more and more people take this stance then they may reconsider. Put yourself in the publishers place - if they have to pay to get their books stocked then they'll cut down on resources available. That means less and less books, less work for authors and as such more and more people will be out of a job. Domino effect baby. If you're a publisher, don't give in to this extortion, go elsewhere and get your product out into the market place.

I'll make this standing offer to any publisher that might read this - I'll happily give free space and advertising to any publisher that chooses not to stock Angus & Robertson. That's right - no payment here, I'll even buy the copies for review. You can get a book on this site whenever you want. The email link is there, so go for it. And Angus & Robertson, you can kiss my arse.

The ABC's Book Show recently had a great little segment on the whole debate, you can download and listen to it here.

Unknown said…
Ta for bringing that to my attention Danny. Sorry i never got back to you about those inking pages but just been hell to busy (still no excuse! Please accept my sincere apology).
Tuesday, August 21, 2007 1:06:00 pm