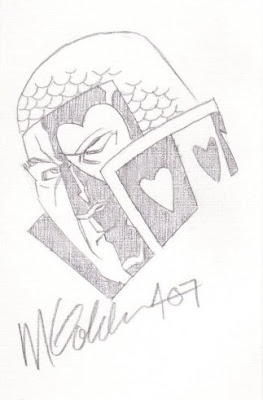 The Michael Golden saga may never end. Sadly the commission that we broke the story on isn't the only one, it's now all over the Internet.

What has emerged from all of it is a new admiration for John Byrne and more horror stories about the way Golden (and others artists) has treated those who have paid good money for not so good commissions. The image you're seeing to the right is a recent convention head sketch done by Golden (he usually charges anywhere from $100 to $150 per sketch, non refundable, payable up front). Not bad really, if you like your characters looking pissed off with the world and about twenty years older than anyone else has ever drawn them. If I didn't recognise the signature then I'd not have recognised the art as being by Golden.

Renee Witterstaetter has responded to the fuss on the Comic Journal forums. In her defense of Golden she claims that, "Recently, a group of four 'friends' that I had given a discount rate to as a favor for a past order, began four months ago to barrage Michael and try to get him to put their commissions before other peoples commissions, which he didn't want to do, and certainly balked at doing.

"When they pressured him to make this never before committed to deadline, and get the pieces out before San Diego, he did, but I guess they didn't like his sense of humor.

"Nor, do I feel it was fair for these people to pressure him to put their pieces before others to begin with, as I said. It would be one thing if they had requested a due date when placing the order, but they did not. I have given them updates, but these were ballpark dates, and an artist does things in their own time. They are not xerox machines." 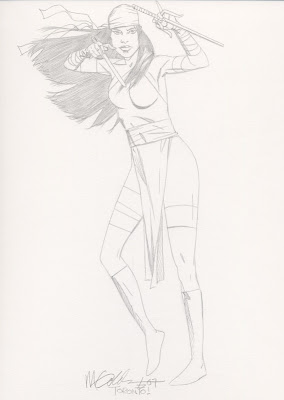 Witterstaetter then goes on to claim that one of the four people she mentioned harassed her at the recent San Diego convention. If that claim is true then someone should be hanging their heads in shame. Gerry Turnbull has denied being given a discounted rate, has denied that no deadline was given and has denied that he asked for his commission to be placed before anyone elses. Oddly enough Wittersaetter seems to think that the art in question will appreciate in value and that everyone else, barring Gerry Turnbull and the 'mysterious three' are happy with their art. A quick look around the Internet will show that more than one person is not that happy with the results of their requests.

To pass off an insulting piece of art as 'humor' just shows a distinct lack of remorse. Frankly I'd not pay good money to have some ridicule me in such a manner (hey - I can be insulted for free thanks very much). Naturally this won't stop people from commissioning Golden to draw art for them, but what it will do is stop a number of people who normally would ask for something. It won't affect Golden too much, but surely Witterstaetter might feel the pinch in lost commissions on the prices? You'd expect so.

Anonymous said…
Sometimes an artist just loses whatever magic they once had. You can see the degenerative process in many illustrators. Sometimes it’s a very slow process and you can see the artist try to compensate for the loss of technique. These sketches speak volumes to me, but I’m not the one paying the bucks so my opinion is worthless.

I’ve always said that the industry knows how to do one thing very well and that’s feed off of it own greed.

If what we’re reading here isn’t a sign of the times then I don’t know what is.

Anonymous said…
Don, you're a far better artist than Golden at this point and your website proves it!

Anonymous said…
The Jack of Hearts sketch looks eerily like a portrait of Frank Miller.