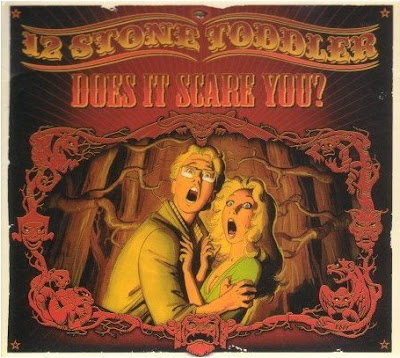 I did this once before and people appeared to enjoy it, so when the latest box of Norm Breyfogle art appeared on the doorstep I just knew it'd be interesting to engage in the same exercise and show people how art is assembled, and in this case why not pick an album cover?

I'm happy to confess that I know next to nothing about the band 12 Stone Toddler, other than they have a great name, and that Norm has now designed an album cover, Does It Scare You? and a CD single cover, Twang, for them, all of which I now own the original art to. Hey - someone had to buy it and it had to end up somewhere. 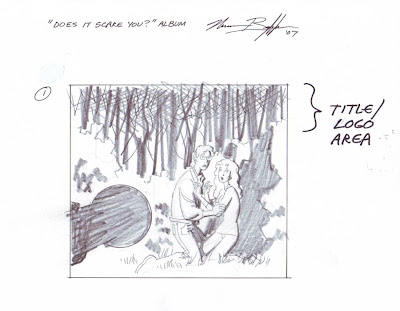 The brief that Norm got on this job was fairly detailed, all things considered. The management and band wanted the following: a fully painted image for a digi-pack with a space at the top for the title. The image had to consist of a couple being scared (clearly - the album is called Does it Scare You?), the only light being a flashlight, our POV, a hot female and a geeky looking guy. There's more notes, but they're all along the same lines. With this on board Norm went to work and sent three sketches for the band to pick from.

The first sketch doesn't show the couple being all that scared, indeed it's more like they've just been caught getting ready to go for a roll in the bushes. 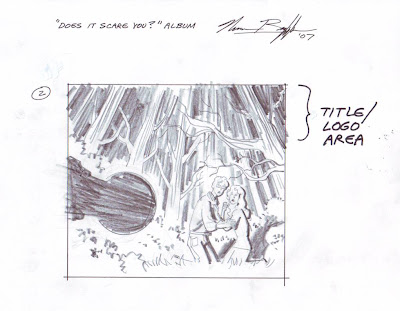 The second sketch is more of a variation of the first, this one I suspect also didn't work because the main figures are a little bit too small. The flashlight is fairly large, and, (and I'll put this down to it being a rough sketch) looks very ambiguous to say the least. The emphasis is more on the flashlight than the figures. However, one thing Norm clearly has hit on as being right here is the background and the angles that he's placed. The trees also seem to be reaching out towards the couple, adding to the fear factor. 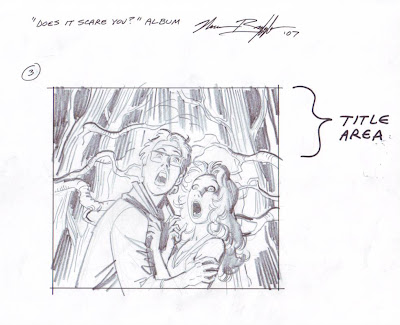 This image is the prize winner. The email attached to this image says that both the band and the management were more than happy with where Norm was going. A tight close up, showing fear on both faces and there's nothing to detract from the figures themselves. The angles in the background are still apparent and the whole effect gives off a sense of panic. All that needed doing with this image was to expand the background slightly, pull back somewhat and tighten it up. 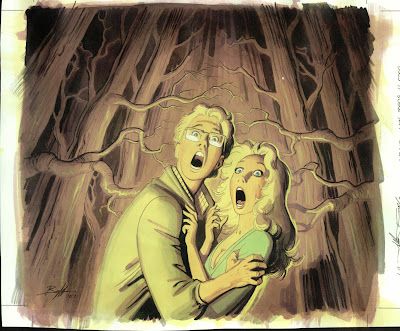 Which is exactly what Norm has done with the final painting. The trees are prevalent this time, really enhancing the sense of danger and fear. You'll never see just what the couple are seeing, not even a hint, and the light paint gives the impression of a flashlight. This painting would be then Photoshopped into the cover format, borders and logos added and thus we have an album cover as seen in the scan that heads this post up! The only problem is that the borders and logos help to cover up a good percentage of the art itself, but it's still a powerful image. It amazes me to think that Marvel and DC would have the world think that Norm can't draw well enough to work on one of their titles, yet are happy to put crap artists on their books and allow quality to work elsewhere. Still I'm betting that the money Norm gets for this kind of work is a tad better than he'd get from either Marvel or DC and the people he works for are more than appreciative of his efforts.

Go out and buy the album itself, if only to have a nice piece of Breyfogle art in your music collection. I'd love to know what the band thought of working with Norm - anyone have a line on them direct?