Batman: A Controversy In The Family 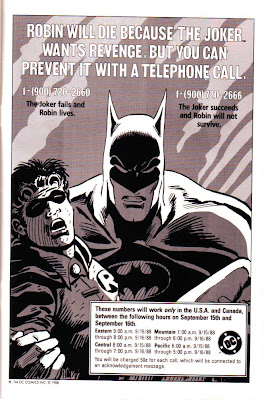 It was one of the biggest and most controversial events in comic books for it's era. The death of Batman's trusty side-kick, Robin. And even worse, the general public got to vote for the poor guy to live or die, and the end margin was a handful of votes for Robin to meet the reaper. The reaper, in this case, was Jim Starlin.

To be fair it wasn't the original, classic Robin that died. This Robin was a replacement, a kid named Jason Todd who came across as a bit of a sulk, a whinger who'd complain at the drop of a hat. Even when the character was relaunched he had few redeeming features and for a while it seemed that the character was being set up for a huge fall. In the issue immediately prior to this storyline it was strongly implied that Robin had done the unforgivable, he'd murdered a domestic violence committing drug dealer. No tears there, but heroes in comic books just don't kick people off ledges to their death because they can't lock them up (in this case the 'Diplomatic Immunity' defense was evoked. Funnily enough the same defense was used in the movie Lethal Weapon II in 1989 to justify murder, with the same results. The immunity was 'revoked'). Still there's plenty of books and sites that detail what went on in those issues, and they still argue the merits of what was done back in 1988/1989. 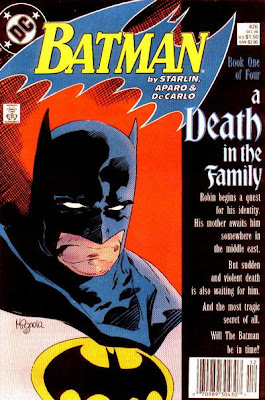 When I had the chance to interview the story's writer, Jim Starlin, I asked about the death of Robin and this was his response;
DB: You went from Marvel to DC and killed Robin.

JS: Well, I always thought that the whole idea of a kid side-kick was sheer insanity. So when I started writing Batman, I immediately started lobbying to kill off Robin. At one point DC had this AIDS book they wanted to do. They sent around memos to everybody saying “What character do you think we should, you know, have him get AIDS and do this dramatic thing” and they never ended up doing this project. I kept sending them things saying “Oh, do Robin! Do Robin!”

Garymoore1985 said…
So,apparently, Batman drops off Robin, at a hospital. As Robin, remains, in a comatose state.Then, Batman leaves Ethiopia, & returns to Gotham City. Then, the story, is exactly, the same. Minus, the funeral, for Jason Todd. Batman still pins The Joker, against a wall, while they sit, on the floor. The Joker, still gets shot, in the heart, by a machine 🔫. And, has his 🚁 explode, over a harbor, next, to a pier. And, he manages, to survive somehow.
Saturday, December 15, 2018 10:00:00 am