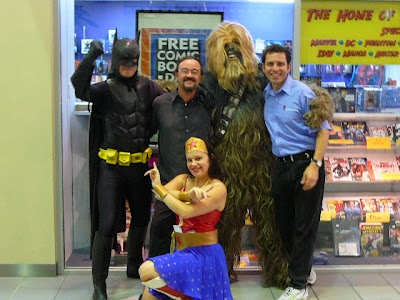 Guess who the idiot is in the Wookie outfit.

This was taken out the front of Adelaide Comic Centre on Free Comic Book Day. Yep, I dressed up as a Wookie and had a blast of a time. Best part is - no-one knew it was me other than the few people who were in on the joke. It was hillarious to grab people I knew, make a sound and give them a hug or a rub on the head, only to see them look at me like I had fleas. The day was a roaring success with Peter and Michael both telling me that they'd completely run out of their allotment of comics by noon, resulting in them sending people to other stores in the CBD. Unlike some shops that I've heard about both here and elsewhere, the lads didn't make people buy a comic to get a free one, nor did they insisat on charging a fee for the free comic books. A splendid day was had by all.

The mange has all but cleared up now. And stop perving on Steph.

shishyboo said…
get a haircut ya hippie!