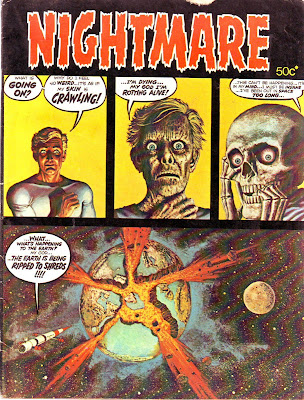 Just when you think you've worked something out a spanner gets thrown into the works. I thought that my theory on the Australian editions of Nightmare was a sound one and I felt that once I found more copies it'd be proven. All I can say now is that clearly I'm an idiot.

I managed to pick up some more 1970s era Australian comics just this morning and I was pleased to find an un-numbered copy of Nightmare in the box of stuff. I'll have to assume that this copy is issue #1 - there's absolutely no issue number or other details on the front cover, nor on the inside. The rear cover does feature advertisements for other Page Publications of the time, those magazines are dated November 1974, which means this book must have come out at or around that time, give or take a month on either side. The contents, like issue #8 that I've already covered, are from the one Skywald magazine, in this case issue #14. The cover is the same, sans the text that exists on the US version.

So no more hypotheses, what I want now is more details on other issues in this run so I can see if a pattern was there, even if that pattern is a random one. Still, we know where it started and hopefully we can work out where it all ended, all in good time.