"In Defense of Quite a DECENT Inker"

May 13, 2007
"In Defense of Quite a DECENT Inker," said the header for one of the emails that I received this week, complete with images. Two pages, one penciller, two inkers. You decide which one is the better.

Since I posted what's now become one of the most talked about transcripts of the year, if not the entire freaking decade, there's been a lot of discussion about Vinnie Colletta's merits as an inker. Over on his blog Eddie Campbell has put forward a case as to why he feels Colletta wasn't as bad as people say he was (artist wise mind you) and Mark Evanier has waded straight in with why he feels Colletta was downright horrid and uses a now famous pencil panel from a Jack Kirby Fantastic Four where Colletta erased Mr Fantastic as an example of Colletta's ineptitude.

Eddie's thoughts are along the lines of Colletta being his favourite inker of the 1960s, Marks are along the lines of Colletta ruining more than he ever fixed. So where does the truth lie? I suspect somewhere inbewteen. I respect both men highly - Eddie is an amazingly good artist who's work I've admired for years now, and Mark is a Kirby expert going back to just after I was born (I kid you not) and his opinions are just as valid. So, what next?

I sat there thinking about this and how Vinnie Colletta has polarised people for decades now. He was maligned when he worked, yet professionals admired him, both as an artist and as a person. Neal Adams has outright labeled Colletta as the worst inker ever. Those who love the work of Jack Kirby detest Colletta - yet there's those who love those Kirby/Colletta Thors and swear by them. The obvious conclusion is that people either liked him or loathed him - there was no middle ground - and that'll continue to be the case for years to come. Isn't it odd that for someone who is so universally hated by so many, the mere mention of his name can stir things up so much. Curious.

Now, to the images. Alan Kupperberg had a read of things and decided to also wade into the debate. Now Alan is an artist who gets the same kind of attacks as what Colletta does (did?) but for different reasons. Part of why people don't like Alan is because he isn't someone else. I know Gene Colan nuts who decry Alan's work on Howard The Duck because it wasn't Colan. I know John Romita fans who hate Alan because his Spider-Man didn't look like Romita. Robbins/Springer fans for the Invaders? Same thing - Alan wasn't either guy. Still his work is pretty damn solid, he could tell a decent story (as no less than Roy Thomas has told me) and he could draw. The guy still can. In fact his recent work is some of the best of his career to date and the project he's currently working on (hush-hush) will shut a few people with it's quality when it's finally released. Thinking about those debates that I've had with people made me wonder - do people hate Vinnie Colletta because he wasn't Joe Sinnott or Tom Palmer? Because he wasn't Chic Stone or Dick Ayers? Do they loathe him because he wasn't Mike Royer? In other words, do they loathe him because they consider him to be bad or because he wasn't as slick or thorough as other Kirby inkers? Think about that and I'd love to hear from people as to what they actually do come up with.

What Alan did do was send me two very early examples of his work inked by two different artists. I'll post what he says about both images. 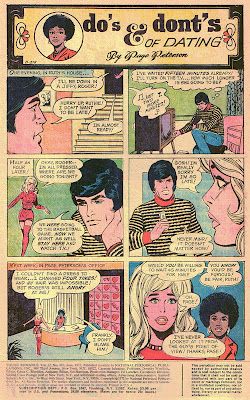 Says Alan, "As you can see, even a nineteen year old kid from the production department can look like a pro when inked by that 'hack' Vincent Colletta, the 'worst inker in the world'." "And here's what can happen when you have one of the BEST artists in the world ink you," says Alan about this image.

So which one is the worst? Hard to say really, I guess the question should be, which one is the better? Now I can only imagine how Alan will describe his original pencils to me (I'll ask him and post them in later), but seriously I expect that Vinnie might have done a lot of fixing back then for the first image. In the second, well that just looks like Neal Adams to me, not that there's anything wrong with that. So what was better? An inker 'fixing' things in such a way that the end result doesn't overpower the original pencils, or the inker turning those pencils into his own style?

Beats me. What I do know is that the name Vinnie Colletta and his artistic merits will continue to be debated within the comic book community for decades to come. The man is more well known and more (in)famous now than he ever was when he was alive. And if you think I'm kidding just check out the 23 comments already on Eddie's blog alone - and that's not counting the various other blogs and forums where this is being debated (some of which actually link back to my original blog entry, and not via someone else who piggybacked on it).

Unknown said…
Your comparing the inking on a House of Mystery cover with a Young Romance Do's and Dont's of Dating one page fill in?
Monday, May 12, 2008 3:56:00 am

Anonymous said…
By the way, the big panel on the page inked by Adams is a rip-off from.... yes, another Adams panel from a story taht (I think) was published in the same House of Mystery or Secrets series.