There's not much you can say about Jona Lewie that hasn't already been forgotten. Yet another artist from the Stiff stable, Jona exploded into my life back in the late '70s/early '80s (along with the rest of the Stiffs) and has remained there ever since. Truth be known it's hard for me to pick the one tune that properly sums up Jona (who's name was really John Lewie, much to my disgust), but then it really only comes down to three songs. Stop The Calvary was the big one, you've all heard it, and the royalties that it still brings in has enabled Jona to live a life of relative comfort by funding the purchase of various rental properties (sad isn't it? You imagine that these people would never do anything so mundane). And then there's the criminally overlooked Louise. But Kitchen At Parties has always been on my playlist, along with the other two songs, and it probably always will be. It's one of those songs that I can never get sick of. Plus I won $150 in music trivia back in 1987 by knowing the location of the party where Jona strikes out with the debutante (it was at some do in Palmers Green).

Jona managed to ride this song into the charts, but the impressive thing was that Louise also charted here as well, something it failed to do elsewhere, and in doing so it reached a more than respectable number two in the national charts. Sadly it's all but vanished from the radio these days and is rarely heard.

Is it worth writing a full history about Jona? I guess not. He came to my attention fully formed, after playing on the pub circuit in the UK since the early 1970s. He'd played with various bands and had some moderate success (including one UK chart hit). That means that he knew exactly what he was doing when he started recording and releasing for Stiff. Sadly he vanished into obsucrity with a series of sub-par singles and a not very good album, but there you go. Happens all the time. In the process he did manage to release the delighfully titled album, On The Other Hand There's A Fist, which is worth picking up. Jona, if you're out there reading this, and let's face it, you're not, then drop me an email - I'd love to talk to you. 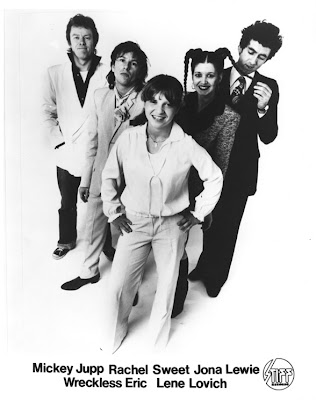 From left to right: Wreckless Eric, Mickey Jupp, Sweet, Lene Lovich and there's our pal Jona playing with Lene's hair. Eventually all of these guys will be featured in my 'Hidden Gems')

The Stiff label holds a certain amount of fascination for me. The label that gave us Nick Lowe, Madness, Ian Dury (and his Blockheads), Rachel Sweet, Elvis Costello, the achingly beautiful Kirsty MacColl, Tracey Ullman, The Belle Stars, Jona and many more. I used to love buying Stiff singles, if only because they sounded different, had funky little messages and codes on the labels and were just a lot of fun, something that's missing from today's mass produced records. Call me an old bastard softie, but those were the days.

Plus the music was good. Still is. And if you can't quite remember Lene Lovich, you're in for either a treat or a shock when I do the next entry...

Anonymous said…
Ah yes, Stiff Records. I hope you do something about Ian Dury.

Anonymous said…
Lena Lovich was offbeat and exciting, as was Ian Dury and Elvis Costello, and many others. There was some great music coming from Stiff in the 1980s.

And thanks for sharing that group photo of Rachel Sweet and company! I believe Rachel Sweet is now a producer of TV programs and sometimes actress. I wish she'd get back into music one of these days...