May 18, 2007
First in a series. Trust me on this. Every so often I'll try and dig out a video of a song that exists on my MP3 player. I'll list the song, the details, why I have it and a cheese factor if required. It might be fun, plus I always like writing about music...

Released in 1981 I loved this from the moment I saw it. Rachel Sweet always moved me as a wee lad, possibly because she wasn't that much older than I was in 1981, in fact she was all of 18 at the time (she was 15 when her first album was released in 1978). She also released a great version of 'And Then He Kissed Me' which I'll freely admit I played until my mother broke the single over my head. 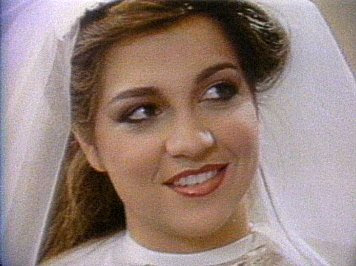 What's not to like about this video? You get Rachel in wedding gear, a wet dream really for a young lad of my age at the time. it's hard to imagine that this was very sexy in this day and age where the young girl singers show off their enhanced breasts and fiddle with their bits on screen - nothing to the imagination. Still Rachel could sing, she was on the Stiff label and that counts for loads in my book.

Unlike the hapless Rex Smith. I didn't know him from a bar of soap and still don't. I'm aware that he was a teen idol and I've been told this one of his albums was reviewed in Rolling Stone and was labeled as being 'worthless'. For the comic book minded people who visit this blog they'll be familiar with Rex Smith because he played Daredevil in the film 'The Trial Of The Incredible Hulk' in 1989. See? Ben Affleck wasn't the worst choice for ole DD. This tune sees Rex trying to sing at the same level as Rachel, something he'd never be able to do on his best day with Rachel losing her voice. She does hold back somewhat, but when Rex starts to raise his voice she gently raises hers and drowns him out - thank God for that!

What I can't understand about this cheese ridden video is why are they singing at the priest? Ahh, who cares? Enjoy!

Thanks for sharing! I was as smitten as you over Rachel Sweet all those years ago. She really had a great voice and I got to see her in concert in New York back in the 1980s. they don't make 'em like her anymore.