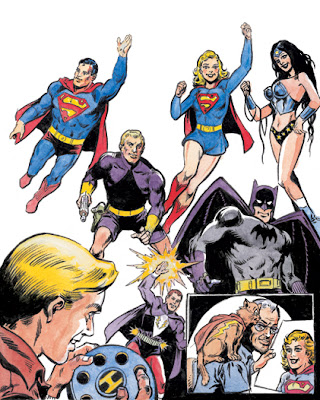 FINALLY!! I'm more than happy to announce the following...

The upcoming book GENTLEMAN JIM MOONEY tells the story of the life and career of one of America’s most prolific comic book artists, Jim Mooney. Told in his own words through rare archival interviews and new, exclusive commentary, GENTLEMAN JIM MOONEY documents Mooney’s life from his early days as the son of a millionaire, through the lean years of the Great Depression, to his days in Hollywood as the brother of a starlet, and ultimately to his career as a comic book artist.

Jim Mooney drew his first pages in 1940, a mere 18 months after the first appearance of Superman, and he’s still going strong today, a career that spans seven decades. In that time, his art has graced virtually every major character in the comic book world, from Batman, Supergirl, the Legion of Superheroes, and Dial H For Hero at DC Comics to Spider-Man, Man Thing, Captain America, the Avengers, and more at Marvel Comics.

GENTLEMAN JIM MOONEY promises to be an essential part of your book collection. It will be published by VEI Press, and more information will soon be available at: http://www.VEIPress.cc.