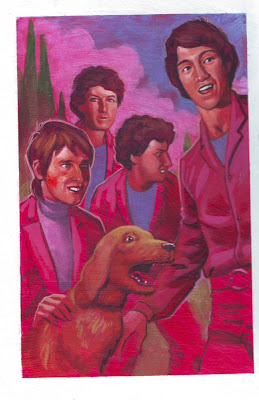 This is the third in a series of four paintings by Norm Breyfogle and five posts. I love this stuff so much that I'm going to keep at it until everything is posted.

I don't mind the Arctic Monkeys, even if they do remind me of The Jam a little too much. So much so that one video of the Monkeys that I saw made me think that it was an old Jam video. Nothing like wearing your influences on your sleeve.

In this image the Monkeys are made up to look like Enid Blyton's Famous Five. I read all the Famous Five books as a kid - I found them to be very entertaining indeed and I fail to understand the backlash that Blyton's work has suffered in recent times at the hands of the PC police. They were wonderful exercises in escapism and more kids should vanish into her books and leave the PS2, Ipods and computers alone (I read all the Secret Seven books too - they were a hoot). Mind you the Five were made up of two boys, two girls and Timmy the dog - I wonder which of the Monkeys are the girls? 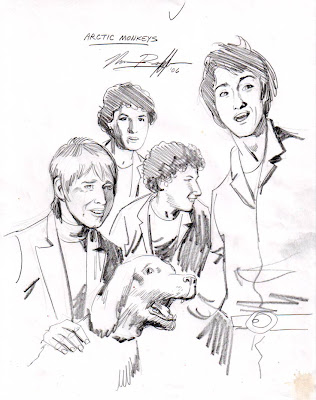 Unlike the previous two paintings that I've posted, this one is as close to the preliminary sketch as can possibly be. It's clear that Norm had his image right from the start and there was little to no tinkering from the pencil stage to the final painting. What strikes me as being funny is that Norm has, either intentionally or unintentionally, made the band up to look like The Monkees at the same time...