September 02, 2006
It's now 5:45am and I've been awake for two hours. Sleep is an oddity for me these days because when the insomnia kicks in it kicks with a vengeance. There's many factors, I've too much work on my plate, the upcoming nuptials and the day job, which is thankfully winding down. As they've broken all their promises there it might be time to start writing on another blog...

It doesn't take much to wake me up. The Legendary Merlin can do it easily enough by yowling to be either let out or let in, depending on his mood. The other half sawing wood in the middle of the night can do it. Anyone moving inside or outside the house can do it. In short, anything can do it. So what woke me up today? It was a doozy. I awoke to the sounds of a female screaming for assistance. The other half woke up and I asked, "You can hear that?" Her response was yes. The screaming continued; "Let me go!! Stop!! I didn't do anything, please let me go!!! HELLLPPPPP!!!!" 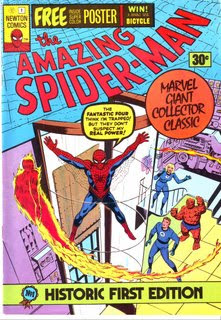 For years The Amazing Spider-Man had been Marvels flagship title, closely followed by The Fantastic Four. However neither of those titles would reach those heights for Newton - Planet Of The Apes would claim that crown, but that didn't stop Newton from keeping Spider-Man firmly on the books. Other than the January/February 1976 shutdown, the book was issued on a regular basis for all of it's 17 issues. However, as with other titles, there were some serious continuity problems. Incredibly the book didn't have an annual, instead relying on a one-shot, the Newton Spectactular, that was issued towards the end of the life of Newton that merely reprinted material that had come before.