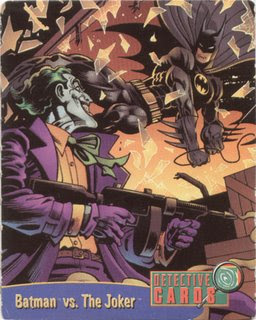 What you're seeing on the blog today are the as rarely seen Detective Cards, as drawn by Norm Breyfogle, that appeared on boxes of Nerds in 1997.

Norm recently emailed me a set of these cards to post into his forum after a number of people mentioned that they'd seen them at some stage. Like the Loch Ness monster, the sightings were infrequent and most people imagined that they'd seen them, but actually hadn't. Norm verified that he had indeed drawn the cards and dug out the copies he had left, scanned them and you can see more of them over at his forum in this thread.

Initially there were eight boxes, sadly Norm only has scans of seven of them and is missing the eighth box, a brilliant image of Robin fighting with Catwoman. If you have a full set of them out there then feel free to email me with high res scans, especially of the missing eighth box.

I asked Norm about the boxes, just a few questions as I love to know about these things. Initially I wanted to know just who …
Post a Comment
Read more 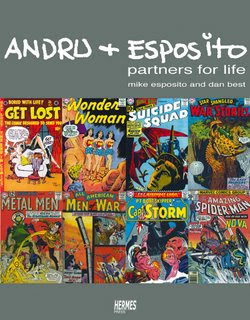 Here's the first, exclusive peek, at the cover art for the Andru/Esposito book Partners For Life. It's very different to the mock-up cover that Michael Netzer prepared for me to help sell the book and while I like the final cover (it does grow on you) I'll always have a soft spot in my heart for Mike's version and I'd like to think that it'll still be used for promotional purposes.

The only problem with Mike's version was the Superman image. I've already stated what the issues were with that image (that it's an Andru/Giordano image, not A&E) but it still makes a good centerpiece for the cover itself. Personally my draft text version has the Netzer cover as it's cover. Still it's a good cover and I can't wait to hold it in my hands - I've yet to see the final version. That's one of the occupational hazards of working across the planet, you tend to be excluded from the final decision making process due to distance. To paraphras…
3 comments
Read more

Have We Got Books? 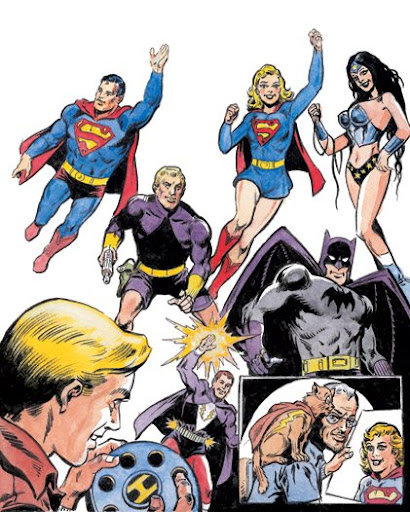 The answer is a resounding yes. We have books. The contracts for the Jim Mooney book have now been signed and are winging their way back to the States. The cover art that you're now seeing probably won't be the final version, but it will be as close to it as can be. I'm about to approach a graphic designer and see if I can't get a decent deal on mapping out a new cover. It'll still be all Mooney, so fret not. Colour me happy indeed. I've approached the publishers with an idea for a signed, limited edition and that's gone down only too well, so fingers crossed and more news as it arrives on the desk.

On another note...The cover you're seeing for the Andru/Esposito book will definitely not be what arrives on your desks. The problem with the cover is the huge Superman figure - it's not an Andru/Esposito drawing, it's an Andru/Giordano figure. I knew this at the time, as did Michael Netzer (who designed the cover for me) and there was no malice inten…
Post a Comment
Read more

Do You Want To Know A Secret? 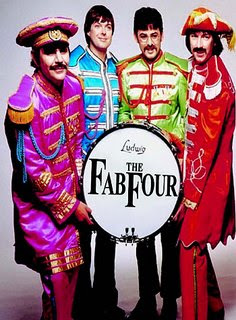 Promise not to tell?

Come closer...The Cavern Club is back in town. We popped down to the Cavern Club on Saturday night due to a birthday party for a niece. Usually I'm not fond of such places - my ears just can't stand bad acoustics anymore - but this time around it went very nicely. The first person we ran into is one of the new co-owners, Graeme. Graeme and myself go a long way back and as I've not seen him for a year or so now it was great to have a decent catch up and chat.

What I discovered was that Saturday night was the re-launch for the Cavern Club in Adelaide. It opened in 2004 and was modeled on the famous Liverpool Cavern Club, but since it's opening it's been a downhill slide. In stepped the Beatles tribute band The Fab Four, Graeme and a couple of investors and off they went, bought the club outright and are setting themselves to have a nice long run. If they can get the food side of things running smoothly then they'll be fine. In fact, let's n…
Post a Comment
Read more
More posts