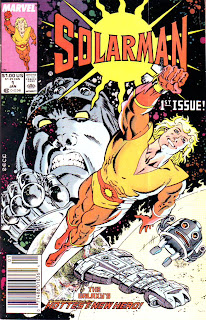 So tell me, what's wrong with this comic? It's one of the more obscure titles from the Marvel line of comics, and one that pretty much everyone associated with has forgotten about, or chooses to forget about. Selective memory perhaps? Of course it is.

Solarman boasted some incredible talent for such a maligned book. Written by Stan Lee and with art by Jim Mooney and Dennis Janke on issue #1, and Mike Zeck and Nestor Redondo on issue #2, this was a book that should have scaled the heights. But sadly it didn't. So exactly why did it fail? 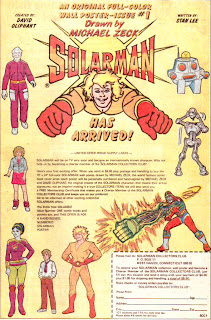 Solarman was created and funded by David Oliphant. The idea was that the comic book Solarman would be the start of a new toy series and a franchise that would remain outside of the Marvel Universe. Also promoted was a cartoon series that got as far as storyboards and layouts for the season and at least one episode, the pilot show, was completed and screened. Clearly the other show being developed at the time, The X-Men, was a better bet for Marvel. There's an ad at the end of issue #1 which shows the true nature of the concept - toys, posters and a Solarman Collectors Club. Clearly it was all systems go and a quick search of the internet turns up a Solarman book, written by Oliphant, and some raw details on the toy side of things. Back to the ad. The first line of the ad shows where Marvel was intending to take the series; "Solarman will be on TV very soon and become and internationally known character."

So what did go wrong? Was it a case of bad art? Funnily enough there were no other ads in the comic other than a Marvel subscription page and the standard ads on the inside covers and the back cover. That left thirty pages of art, unusual for the time, but if ever anyone could pull that off on time it was Jim Mooney.

At the time, 1989, Mooney was nearing the end of his career at Marvel. He'd started with Marvel in the late 1960s and had been working as a comic book artist, steadily, since 1940. Jobs had dried up, he'd come off a stellar run on the Spectacular Spider-Man and was looking for jobs to do. Marvel, in particular Jim Shooter, had decided that Mooney wasn't an artist designed to take the company into the future, and was attempting to pry him out, as they'd done previously with such established talent as Dick Ayers, Gene Colan, Tony Isabella, Jim Starlin, John Byrne, George Perez, Frank Miller and others. There'd been a mass exodus of talent from Marvel to DC (something I'll write about later this week actually) and those who hadn't left were being encouraged to go. Sadly Mooney was considered to be old school by Marvel and once his contract expired they let him go with the words 'retire' ringing in his ears. Luckily Mooney ignored the advice and went onto another golden age for him, working at DC, Claypool and other companies and is still producing art to this day. Shows what the editors knew then.

Dennis Janke was anything but a hack as well. He'd been around for years by this stage and was, and still is, well respected within the industry. Janke's inks were a perfect compliment to Mooney's art, and if there were any concerns that Mooney would look dated then Janke eliminated them completely. The art looked as modern as anything Marvel was producing. Having said that the art is slightly confusing and out of odds with the dialogue, no great surprise really as Stan Lee would have inserted his dialogue into the books after the art had been completed. Some scenes look like they would easily fit into a serious books, at other times Mooney draws Solarman in a style reminiscent to his work on Thundercats. However if Solarman was designed to be a response to Superman (same power source and similar powers, as Superman had been recently relaunched by John Byrne) then who better to draw it than Mr Supergirl himself, Jim Mooney? 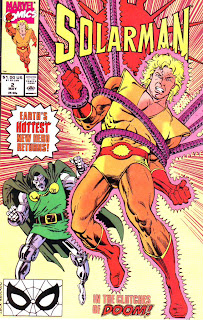 Along with supplying the cover art, Mike Zeck took over the art chores for issue #2. Here lies the first problem - issue #1 is cover dated January 1989, issue #2 is cover dated May 1990. That's a gap between issues that Image Comics would have been proud to have had. By the time issue #2 came out any momentum was completely gone and the book might as well been a first issue. Zeck is a superstar artist. Best known for his work on The Punisher, Zeck had gone from strength to strength and was considered to be one of the best artists in the Marvel stable at the time. His inker/finisher on the book, Nestor Redondo, was also anything but a hack. One of DC's best horror/suspense artists, Redondo had a genuine following and he had enhanced that following at Marvel where he cemented his status by supplying stellar work on fantasy titles such as Conan and Red Sonja. So if it wasn't the art, then what was it?

The writing? Now we're getting somewhere. The Stan Lee of the late 1980s couldn't hold a candle, writing wise, to the Stan Lee of the late 1960s, or even the early to mid 1970s. Stan Lee created some of the most interesting, and poignant stories of his time, and a large portion of the success of Marvel Comics lays at his feet. Along with Jack Kirby, Steve Ditko and others, Lee created the Marvel Universe. However he didn't create Solarman. Stan had stopped writing comic books in the mid 1970s and outside of a few text pieces hadn't written a complete book since then. Writing requires muscles to work, you have to exercise those muscles or like anything, if you don't, you lose the ability and ease in which you operate. Stan, for all his good intentions, was hopelessly out of touch and his writing, although clearly geared towards younger readers, is sadly dated and difficult to follow. At times the dialogue doesn't match up with the action being portrayed and the confusion as to if this was happening within the Marvel Universe or without is very prominent with two sequences. 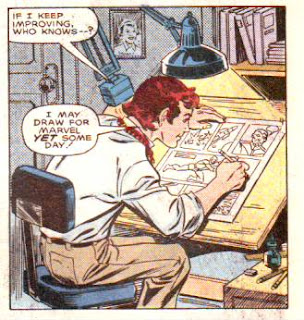 In the first issue the main character longs to 'work for Marvel Comics'. In the second issue he presumably is working for Marvel as he name checks the editors of the actual book (Bob Budiansky and Tom DeFalco) and mentions how he's swipe a Dr Doom figure from 'Buscema'. Presumably this is John Buscema, although the swiped figure looks like pure Mike Zeck, an artist who is as removed from Buscema as anyone could be. 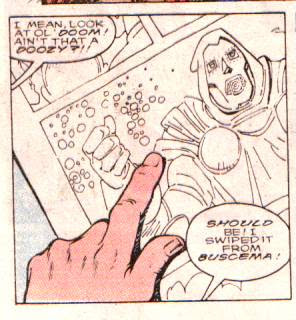 By putting real life Marvel staffers into a comic book that also features the fictional Marvel characters (Dr Doom shows up on the next available page) makes for a book that doesn't know it's true identity. Zeck and Redondo do their usual excellent work here, given the material they have to work from. There was no chance of Mooney drawing issue #2, by this stage he was gone from Marvel and already working at DC, probably a good thing.

I once asked Jim Mooney about the Solarman series and he said he couldn't remember a thing about it. It was just another job to him, as I presume it was to a lot of people including Zeck, Janke, Redondo and even Stan Lee. I actually own some of the original art to Solarman, but to date I've not seen any art from the Zeck/Redondo issues. I suspect that Zeck would rather it'd all go away and no-one would remind him of a failure that didn't even reach the level of being spectacular.

Michael Brown said…
If David Oliphant was involved in this project, then you should know about his first attempt at doing Solarman back in 1979/80 with Pendulum.

Better known for their take on classic illustrated, Pendulum did a series of 3 full color original 'comics' with Solarman.

Here, Solarman was a humanoid alien from an interior hollow metal 'world' within the sun, inhabited by 2 humanoid races: the highly advanced Solarites, and the less advanced group (forget their name) who lived in the metal shell.

Solarman (real name Davos), the son of the the leader of the Solarites, came to earth to save us from destroying ourselves with war, pollution, etc. To become well known and have money, he became a baseball player.

He got a supersuit in the 2nd issue (illustrated by Dick Giordino and Frank McLaughlin), really an alterted space suit, and used it again in going in action in the 3rd issue (uncredited as to art, think it was Redondo).

Interesting series hampered by some bad science and environmental preachiness.