The Invaders: Alan Kupperberg Looks Back 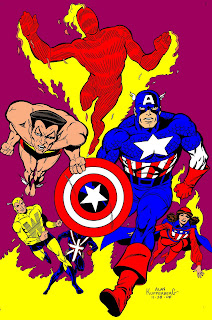 Classic 1970s Marvel. The brainchild of Roy Thomas, the Invaders first 'appeared' in The Avengers #71 (December 1969) as part of another on-going story. Roy then used the characters again in another one-off appearance - the classic Timely trio of Captain America, Namor, the Sub-Mariner and the original Human Torch - as part of the now legendary Kree-Skrull war, which also ran in the pages of The Avengers (issues #91 through to #97). This time Roy even gave them a battle cry, straight out of Timely Comics, 'OK Axis, Here We Come,' although Roy has stated that he lifted the cry from the title of an article written by the late Don Thompson.

From there they sat in the back of Roy's mind until 1974. Finding himself at a slight loss after stepping down as Marvel Comics Editor-In-Chief, Roy revived his concept of a team of super heroes fighting in World War II and sold it to Stan Lee. Thus were born The Invaders. The genesis and the first issues of the title were covered in detail by Roy in the seminal fanzine, Alter Ego, not that long ago (Alter Ego, Vol II, #2) and in his article Roy makes mention of how he came to work with the legendary Frank Robbins on the book. Robbins had a style straight out of the Milton Caniff school and, for this book, was paired with both Vinnie Colletta and then Frank Springer. The Robbins-Springer art team was one of legend: two artists in perfect synch. More than one person failed to warm to the artists though, partly because Robbins, an old time DC artist, refused to change his style to resemble the 'generic' Marvel art of the time (John Buscema, John Romita etc). Robbins art stood out, jarringly at times, and people either loved it or hated it.

Roy Thomas and Frank Robbins stayed with the book until issue #29. After moving to California Roy turned the book over to writer Donald Glut, and, with Robbins leaving, the art chores fell to a relative newcomer on the Marvel scene, Alan Kupperberg. Roy hasn't covered the Glut/Kupperberg issues in any great detail (to my knowledge) and recently I asked him just how it was that Kupperberg was given the book to drawn. Roy's reply was that, "I remember Alan Kupperberg's enthusiasm. He lacked some polish back then, and has developed apace since... but he always told a good story and was good to work with. He, Howard (then Howie) Chaykin, and I used to hang out together some evenings, too, when I'd separated from my first wife." This goes against the (very incorrect) theory that somehow Alan Kupperberg was assigned the art duties due to some form of nepotism. Kupperberg got the job for all the right reasons.

Other than one fill in-issue early in the piece, Kupperberg enjoyed his longest run on a Marvel comic with The Invaders. The run latest from issue #29 through to the book's final issue #41. It's a run that is remembered fondly by readers of Bronze Age Marvels and a run that is crying out to be reprinted. Essential Invaders Vol I and II anyone?

Recently Alan Kupperberg took time out to speak about his Invaders work.

DANIEL BEST: How did you get the job pencilling The Invaders?
ALAN KUPPERBERG: It’s more than likely I approached Roy Thomas and told him that I was looking for work. And he put me onto the Invaders. I had done a few What Ifs? that Roy had edited.
DB: In the letters page of your first issue Roy mentions that you were fresh from What If #8.
AK: Yeah, with Jim Mooney. That’s pretty much how simple it was. I was in the middle of drawing What If? when I moved across the river from Queens, New York, into Manhattan.
DB: Do you know why Frank Robbins left the title?
AK: I don’t know. 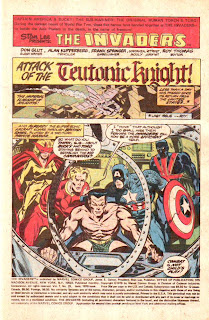 DB: Looking at your first issue it surprised me how much the art resembled Robbins.
AK: I think it’s because of Frank Springer. I always thought Frank Robbins was a very weird kind of superhero artist. I like his stuff, have a great affection for it. But in my opinion, his stuff was very rubbery. Weird, flailing limbed figures. That was just his style. And my stuff was very primitive. I was just starting out and didn’t know as much as I’d have liked to know. So that kind of echoed Robbin’s weirdness, but it was just my lack of knowledge. Frank Springer was able to pick up on those different aspects and make them similar.
DB: One thing that strikes me is that you have Captain America’s mouth permanently open, which is something that Robbins did as well.
AK: That’s the Ogden Whitney effect. I don’t recall if I pencilled it that way. That might very well have been something that Frank Springer did.
DB: What did you think of Frank Springer?
AK: I thought he was and is phenomenal. By the way, I figured something out when I was looking at this stuff in preparation for our talk today. I’m always complaining about the inkers I’ve had on my work. And I realised that if the inker wasn’t Neal Adams, I was going to bitch and moan.

Rodrigo Baeza said…
An excellent interview (as always), Daniel. Thanks for posting these, I love these behind-the-scenes looks at mainstream comics, and Kupperberg certainly has a fair share of interesting stories to tell.