November 30, 2006
Today it's another grab bag of various goodies, picked up from various second hand bookshops in the country and from other sources. I've only started collecting the Horwitz line for about a year or so now but already there's a sizable collection gathering in the workroom. 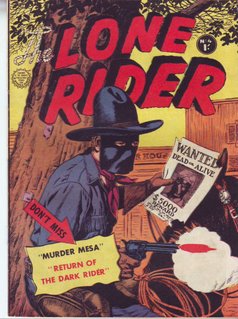 Not sure who the cover artist is here. It has the hallmarks of a Bramley, and it's likely that it is him, but it's unsigned and Bramley more often than not signed his work. It is a Horwitz though, and this one contains Timely (Marvel) era western stories, including an early effort from John Romita. 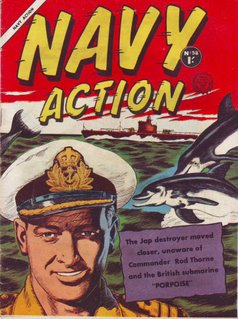 This is a Bramley. Not only is the cover done by the man but he contributes to the bulk of the insides and the book includes a great splash page of a navy ship entering Sydney Harbour. It does have what appears to be a Timely back-up story to flesh it out, but all in all this is a good book to get. 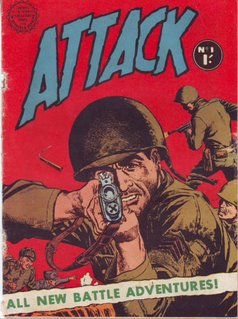 I'm happy to stand corrected on any publication date. I've long misplaced my copy of the Australian comic book price guide (hint - if anyone out there has a spare, let me know - cash is waiting). This cover looks very familiar, and looks to be a Bramley. A very powerful image indeed. As with the other early issues of Attack this one is chock full of Timely war stories.

The lead story in this issue does solve a mystery. Titled Killed In Action, the splash to this story was lifted for the cover to Attack #7. Another mystery solved. Later I'll post that cover and the splash in question and you'll see what I mean. 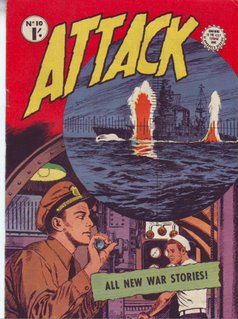 Same as the above. The image of the boat in the submarines periscope looks very much like a Bramley image, so I'll say that it is, even if it's a swipe. It does remind me of the cover of an issue of The Phantom Commando, but I can't recall which one. More Timely/Marvel stories. 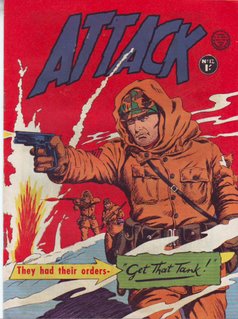 I really need to narrow down the dates for these books. More research for me, clearly. Another book with a dubious cover. As issue #7 has a 'clean' cover and is a lift of a splash, I'm suspecting this one is the same - a lift from a Timely/Marvel era story. These books have some great Joe Maneely and John Servin material in them - I'm surprised more of the American collectors of Timely don't get on the bandwagon. 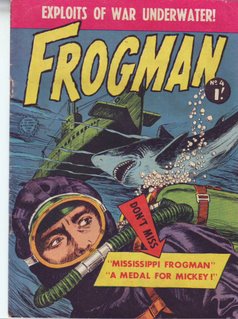 All Australian content? It certainly looks like it. Frogman was a book issued by Horwitz and by all accounts it featured partial to full Australian content by none other than the legendary John Dixon and Maurice Bramley This is the title that Bramley was supposedly have swiped images that he later used in The Phantom Commando, according to some sources. It's highly possible that he did - I can't think of too man artists who won't deny swiping at some stage in their careers. Another great book to have that only suffers from very poor reproduction when it comes to the interiors. 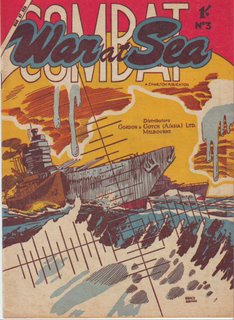 Published by New Century Press, this book is chock full of Charlton reprints. The cover appears to be signed by someone named Maurice Withman - does it ring a bell with anyone? It is a hard signature to make it, as it's stylized and doesn't read as clearly as it could. 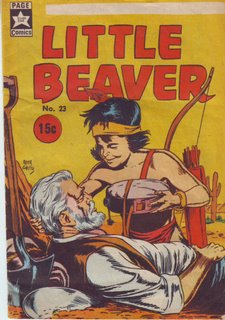 Dell reprints are hidden behind a superb Keith Chatto cover. This is a classic! Utterly politically incorrect, Little Beaver was the sidekick of Red Ryder, and predated Batman's Robin by a full year. Little Beaver was published in his own right by Dell for a few issues - less that 12 - so I'm not sure how this managed to get up to issue #23, other than Page Comics do their best to make the numbers high. The general theory in comics was that the higher an issue number the more likely it was that it'd sell - after all if it was issue #89, or #164 then it'd been around for ages and must be good - right? Didn't always work that way, but it does make for fun when it comes to collect a run.

I'm inclined to believe that most of those uncredited/unsigned covers are, in fact, drawn Australian artist Maurice Bramley.

The only exception I'd make here is Attack #1, which seems to suggest a retouched version of an original American cover illustration - the style suggests someone like John Severin, or Joe Maneely (who did lots of work for Timely/Atlas in the 1950s), but I don't think this one is from Bramley's pen.

As for that Combat: War at Sea cover, here's a brief bio on the artist, Maurice Whitman:
http://lambiek.net/artists/w/whitman_maurice.htm
Thursday, November 30, 2006 11:49:00 am