Behind The Scenes: The Krypton Companion 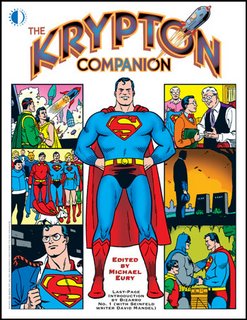 Michael Eury's Krypton Companion finally hit the stores here yesterday, so I instantly ran out and bought a copy. It's hard for me to review such a book, for obvious reasons. For those who don't know the Jim Mooney interview and the Mike Esposito pieces are mine, and I'm credited appropriately. That's not the problem though.

I like the book. The interviews and information contained within are great. Michael contacted me at the start of the year and asked if I had anything on Ross Andru and Mike Esposito relating to their Superman work and if I had any information to share about Jim Mooney. I provided him with a partial chapter from the Andru/Esposito book and an interview with Jim where we spoke about DC and Superman/Supergirl. All was good and I'll still be happy to assist Michael with anything he works on - and he knows it. He only has to ask and if I can then I deliver the goods. Michael is a class act, a great editor and a damn good writer and nope, I don't get paid to say that, and I didn't get paid, nor did I ask to, for my contributions to the book. I'm a firm believer in sharing information and I can't tolerate intellectual snobbery. Michael has a way of putting together these books in record time and the results are always staggering. I'd recommend it to anyone - I like these books so much that I usually go and buy a copy well before any contributor copy ever turns up (good thing too as I've contributed to books over the years and never seen a copy - in one case I wrote five chapters out of twelve in a book and have yet to even hear a thank you, let alone see a copy of my work). I support the author and the work, and the enjoyment that comes from it. So what's the problem?

In the book Michael interviews Gerry Conway. In the course of the interview both men make reference to an article I wrote for Back Issue magazine, titled Superman vs The Amazing Spider-Man: The Mystery Artist Revealed. To summarize the article, in the course of writing the Andru & Esposito book I wanted to lay to rest the rumour that Neal Adams had erased and re-drew the bulk of that book. Several theories abound, that Ross couldn't make the grade, that Neal's ego got the better of him and at the end of the day I wanted the truth so I could publish it. Eventually I got to the bottom of the case and discovered something entirely different. All was good. Since publication I've heard from Neal himself, Joe Rubinstein and Terry Austin amongst others about the article, and everyone, and I mean EVERYONE all agree that Ross Andru was a superstar artist. I have Neal Adams on tape telling me how good Ross was and that he (Neal) didn't erase anything at all, only enhanced it. However in the Conway interview Michael Eury makes mention that Dick Giordano was upset and wished he'd never shared information with me about the project because it might have been seen to have been a slight on Ross. Funnily enough, if you click the above link it'll take you to Dick's site where my interview with him is. That information is out there, on his own site.

I like Dick Giordano. What surprised me is that we've emailed since and he's never once told me that he was disappointed with the article. I've emailed him since to say that my intentions were to show the world that the rumours were false, those rumours being that Neal erased Andru's pencils. For the record: Neal Adams didn't erase anything that Ross Andru drew. He 'inked' some of the pencils in pencil. Not all of them, just some. Marvel also instructed John Romita Sr to re-draw some of the heads of Peter Parker and Mary Jane, but that happened quite often back then (house style rules) and still happens today. End of story.

Every artist I've spoken to who worked over Ross Andru all say the same things: he was a genius as an artist, one of the best. However his work often needed fixing. Later in his life that can attributed to his failing eyesight, however earlier and in mid career it was because he was perfectionist who'd draw and re-draw the same panel several times, often flipping the page and lightboxing it so he could reverse the image to correct it, hence there were a lot of thick, heavy lines on the page. Ross was never happy with the end result as brilliant as it was. If you want to see Andru's pencils that haven't been 'fixed', then grab anything that either Don Heck or Bill Everett inked. They inked every line on the page and the results are interesting to say the least.

I'd like to go on public record here and now and say this: Ross Andru was head and shoulders above almost all other artists. He was picked for the Superman vs Amazing Spider-Man book because he was the best man for the job and he did a better job than any other artist I could think of at the time. Ross drew one of the best Spider-Man runs ever and I include him in my list of the best Spider-Man artists of all time - above Gil Kane, above Todd McFarlane, above John Romita Jr, above John Byrne - indeed in my world Ross comes in equal second behind Steve Ditko and on the same page as John Romita Sr. The article, like the book, was designed to celebrate the lives and work of Ross Andru and Mike Esposito, not to slight them. I'll apologise to Dick Giordano on public record (as I've done privately) if such a slight came across as it was never my intention.

Now that's out of my system, scoot on over to the TwoMorrows site and get a copy of the Krypton Companion. You won't regret it at all. And I still like Dick Giordano.