August 03, 2006
The big one. For years I'd only ever seen the cover for this book in ads in various Newton comics, never had I clapped eyes upon an original. In fact I started to have serious doubts as to if it actually existed, and those doubts were increased when none other than John Corneille told me that he'd never seen one either. That changed somewhat when another Newton collector, Robert Thomas, informed me that he had an original Swap Card album. Armed with that knowledge I set about tracking down one of the most elusive Newtons of all.

Luck finally came my way a couple of weeks ago when my good friend Kevin Patrick emailed me with some general comments and chat and mentioned that he'd just picked the album up the previous week. I mentioned that if he ever wanted to sell or trade it then to keep me in mind, but knowing Kevin's love for Australian comics I doubted that'd be happening soon. I also asked if he'd be willing to scan it. Kevin then went one better - he'd be happy to trade the album to me for some Australian Batman reprints. I sent down a list, Kevin selected what he wanted and the trade was done and sealed. Due to my post office being asleep the album finally arrived this week, a full fortnight after being sent by Kevin. So, without any further ado, here's the Newton Swap Card Album! 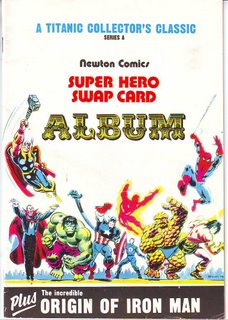 This book wasn't available on the news-stands, it was only available as a mail-away item.

That's right, the album even has a comic book inside. Newton apparently held off printing Iron Man's origin story in the title that would eventually be launched in favour of giving readers a chance to own something more than a book with blank pages (as mine is - no cards are inserted, which is a bonus to me) although the story would be reprinted in the Origins book later down the track. The story is split in two and the splash for the book also features an edited version of the original TOS cover art.

The poster for this comic was of the Silver Surfer. 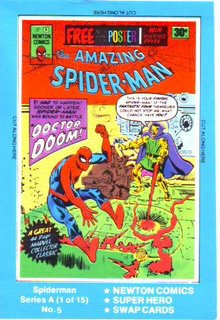 The swap cards themselves have become one of the most sought after premiums from the Newton comics. The cards used to fall out of the comics at the best of times, especially with repeated readings (the card you're seeing fell out of a Spider-Man book) and they were a nice item for young kids wanting to have the comic book images with them. The cards featured cover images of actual Newton comics and ran for 15 cards in each series. For the record the five different series were:
The Amazing Spider-Man
Planet Of The Apes
The Fantastic Four
The Hulk
The Avengers

Each series ran for fifteen cards, presumably those cards would showcase the first fifteen covers of that particular title. A full set would valuable indeed.

The back of the cards would have a quick quiz about the contents of the comic itself with a chance to win a free poster. The same time saw Newton attempting to copy the parent company, Marvel, by introducing Super Hero Value Stamps. The prize for collecting all twenty five of the stamps (just a head shot) was a copy of the Stan Lee/Jack Kirby book Origins Of Marvel Comics. 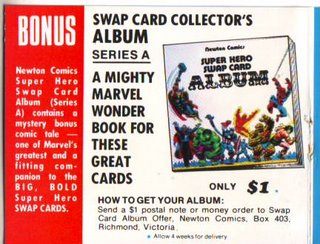 Just for interest, here's how I always imagined the swap card album looked, if only because every ad for it had presented as a square book, not the regular comic book shape that it is. As the book is the size of the average Silver Age comic it differs from the normal Newtons, which were sized just a bit larger than a Golden Age comic and slightly smaller than a magazine.