August 15, 2006
Back again. It was a very productive weekend in Melbourne, loads of fun and as usual I came home with about two boxes of comics and about the same in books. Caught up with a pile of people whom I both know and met for the first time - I was both surprised and pleased with the amount of people who commented on the Newton material and said that they're keen to see more. Keep looking, more Newtons will be posted by the weekend. I've come back to find about 600 emails, so if I don't reply to anything sent then re-send it because I may have deleted it by accident. There was good news to come back to as well, but more on that later once contracts have been sealed up.

On that front...Newtons were scarce this trip, but I did manage to track down some Tomb Of Draculas - including issue #1 - along with a near complete run of Deadly Hands Of Kung Fu, the Silver Surfer one-shot and the first issue of Science Fiction. More details/scans to come. In short I picked up enough to warrant us making a fourth trip to Melbourne, slated for November this year.

Onto the UK tabloids. I also scored a few early to mid '80s Spider-Man comics and some Marvel Super-Heroes featuring the X-Men. These feature some impressive cover art, especially the Spideys which are unique and feature some great fully painted covers. I'll be posting them on the proposed new UK Marvel site, when I get it organised, again, sometimes over the next weekend.

Until then, here's the last lot of the Mighty World Of Marvel's that I've got on hand. Hopefully I'll unearth some others in the near future. Keep those artist IDs coming. The last lot have gotten the Kirby list buzzing as people attempt to work out just who did pencils that Daredevil pin-up...Joe Orlando, Wally Wood, Steve Ditko, Jack Kirby - pretty much everyone's name has been thrown about the place, and that's what this is all about. Showing off some rarely seen art and giving people something positive to talk about as opposed to the standard depressive rants that go on. 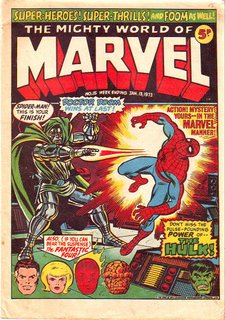 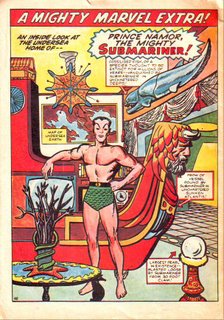 Kirby...I know I've seen this before in several places, so it's an American pin-up from an issue of FF, or the 1st annual perhaps? 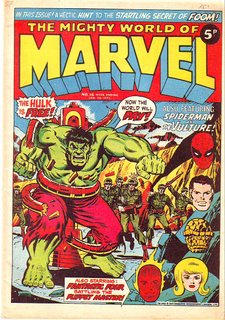 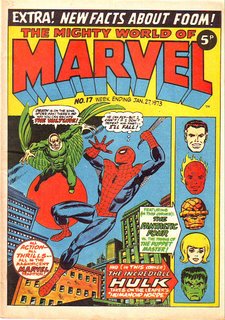 Damn, I love that cover. I can see Mike Esposito in there. 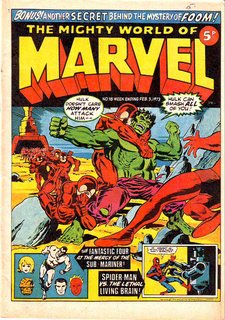 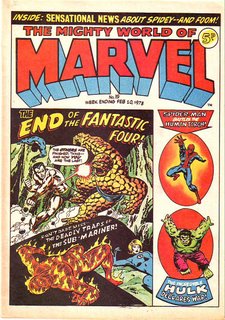 Interesting. I know it's not Gil Kane, but the lay-out and design is certainly Kane - it's a swipe, but who did it? 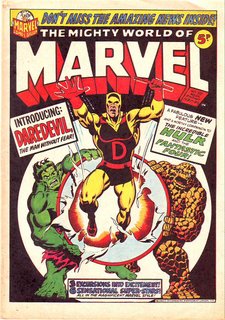 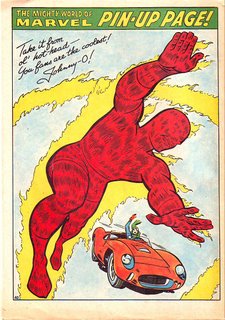 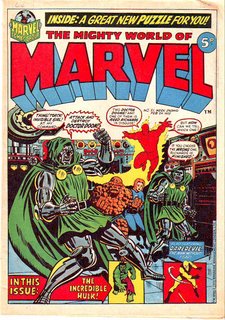 A variation on an American Marvel FF cover. 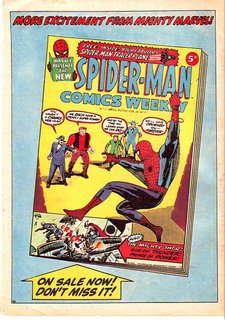 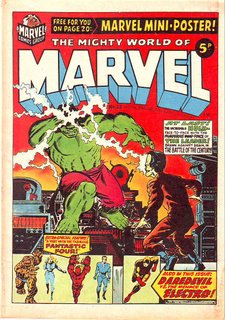 Another effective cover, if only for the use of colour. 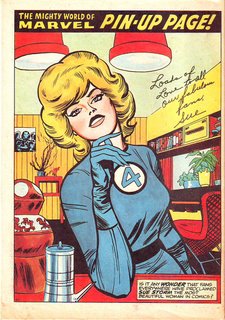 That's all for now. Next up we go back to the Newtons and see what research has uncovered. Until then, leave those comments and ask those questions.

MWOM 15 - This is either all Romita or an unknown penciller with Romita inks.

MWOM 16-20: I believe all of these are the early work of Jim Starlin. #'s 16, and 18-20 have distinctive inking by Joe Sinnott. # 17 and 21 is probably Giacoia, although Esposito may have assisted as well (# 19 also appears to have touch up work by Esposito). # 21 and 22 is an uncertainty, it may be quickie Starlin jobs, with Giacoia and Esposito assists.

The back cover of #21 was taken from the cover of Amazing Spider-Man # 10. The original is a mix of Ditko (The Enforcers) with Kirby (Spider-Man).

Anonymous said…
taking another look at the Doom figure on MWOM 15, this may be Starlin pencils with Romita inks and touch ups.