August 24, 2006
Not much in today's post, but what it might lack in content it surely will make up in interest as we look at two classic examples of Marvel UK's landscape issues. Again, scans and additional information courtesy of David Johnson. 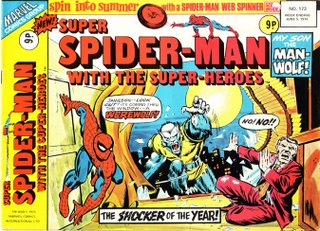 These landscape issues are amongst the most interesting, art wise. The stories were chopped to pieces to fit into the new format, although the covers have a lot of potential, acting almost as a widescreen projection would. You can compare this cover with the original by clicking this link. 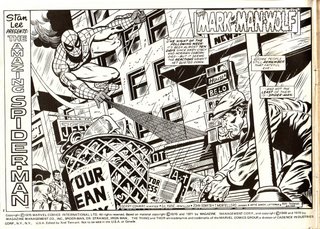 Splash page. Here's a classic example of how the art was chopped and changed to suit the landscape format. Of note, this issue was edited by future Pet Shop Boy Neil Tennant. 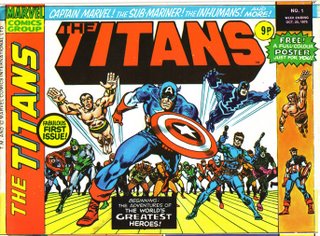 A lot of those figures scream Romita to me. The Nick Fury is a decent Steranko swipe, the Sub-Mariner looks almost Kirbyish with the blocky fingers and the Black Bolt has elements of Gil Kane. Thanks to David we have the contents with commentary:

Captain America - Stan Lee, Jack Kirby, Frank Giacoia, Artie Simek. The Origin of Cap from Tales Of Suspense 63. Again the story fits in snugly, all ten pages. The only correction they seem to have made, is changing Frank Ray to Frank Giacoia in the credits.

Nick Fury Agent Of S.H.I.E.L.D. - Stan Lee, Jack Kirby, Dick Ayers and Artie Simek. First appearance from Strange Tales 135. This is edited though, only six pages of this story.

The Sub-Mariner - Stan Lee, Gene Colan, Vince Colletta and Artie Simek. Beginning the first solo feature for Namor in the sixties, from Tales To Astonish 70. Again, there's tampering with the credits, changing Adam Austin to Gene Colan, and erasing Stan's humourous digs at Artie. Splash is slightly resized, with a Stan note erased from the bottom. Final page, last panel, final caption box is erased and a giant "continued!" pasted over it. Full 12 pages of this episode reprinted.

Captain Marvel - Arnold Drake, Don Heck, John Tartaglione, Artie Simek, edited by Stan Lee. From Captain Marvel 5. Another re-sized splash page, with additional art along bottom. Caption box is re-lettered to say continued from Planet of the Apes 52, instead of Captain Marvel 4. Strangely enough, they go the whole hog here, and reprint the whole episode, all 20 pages of it.

If you look closely along the bottom edge of the cover, and the inside front cover, you can see the top edge of issue two, where they haven't cut it precisely. This gives the impression that they were getting two issues printed at the same time!

More to come. I've a pile of posters to piece together and post yet, plus I'll be continuing the Newton line and starting to look at other Aussie Marvels.

Anonymous said…
Titans 1 looks like another Ron Wilson/Frank Giacoia job to me.