August 24, 2006
These early Silver Age Marvel's were produced by Horwitz Publications. Too little is known about Horwitz and Bramley and some of the people who do know tend to keep such information to themselves for fear that someone might actually spread the word and attempt to education people. Shock! Horror!! John Ryan's excellent (and criminally out of print) book, Panel By Panel (pgs 209-210), tells us this about Horwitz.

Horwitz Publications had reprinted US comics from the early 'fifties but produced very little in the way of local comics until late in the decade. Following similar moves in the US and, perhaps, sensing the Queensland problem, Horwitz issued a Code of Publishing Ethics to all their editors, artists and authors in March 1954. The Code had a particular reference to comics and spelled out the details of what could not be done. Plots were to be told simply in a way not to confuse even the youngest reader as to motive; sex was out in any shape or form; grammar had to be faultless; blasphemy, reference to the Deity, and profanity or suggested profanity was forbidden (e.g. `What the ?' and `Holy Cow!'); at no time could a hero break any law, no matter how minor. Like its US counterparts, Horwitz's Code was aimed at producing pap for the lowest common denominator - but obviously the US Code wasn't tight enough for Queensland which banned all issues of Horwitz's reprint, T-Man, in June 1956.

Horwitz were large publishers of war, western, and crime comics, including Navy Combat, Navy Action, Frogman, Fast Gun, Wyatt Earp and Buffulo Bill. Most of the covers were the work of Maurice Bramley who also contributed filler comics to the war and western titles. A former staff artist with Associated Press, Bramley was a meticulous draftsman whose detailed pen work and realistic drawings were a cut above many of the illustrators in the field.

In February 1958, Horwitz published the first Carter Brown Comics drawn by C. E. Drury. Ranging between 56 and 64 pages and selling for 2s, the comics were adaptations of the popular Carter Brown novels which were also published by Horwitz. Six of these novels were banned in Queensland in 1960 and another in 1961. At a time when reprint comics contained 100 pages for 2s., Carter Brown Comics didn't last very long despite being well-illustrated. Another of their novel adaptations, Marc Brody, had a similar fate. The comic was the work of Royce Bradford who also drew The Cloak stories for Tales of Mystery Comics.

You'd think that there'd be more written about this material, but sadly there just isn't. Most of the books about the Australian comic book scene focus (rightly) on the Australian produced material. Other books, such as Vane Lindsay's excellent The Inked In Image and the comprehensive A Cartoon History Of Australia, focus more on the cartoons, the newspaper strips and political one shot, the gag material than they do the comic book themselves. Great books and essential for the book shelf, but they come up frustratingly short in some areas. You want some meat and what you get is a chop. Even the most recent publication, Bonzer, barely touches on the reprint material (outside of The Phantom) and has virtually no mention of Bramley. Still, those kinds of gaps are what drives me on. I'm hoping that eventually I'll discover some treasure trove of hidden material (I still want to get my hands on copies of the fanzines The Australian Comic Collector and the New Zealand produced Strips) and who knows? Maybe one day it'll all come together.

In the meantime, feast your eyes. 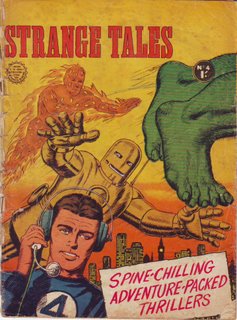 The latter story is what separates, along with the excellent cover art, these books from the later reprints. Virtually each one of these Horwitz books, in order to keep up their Australian content, contain a story, usually one or two pages, sometimes text with an illustration, sometimes far more, from local artists and writers. 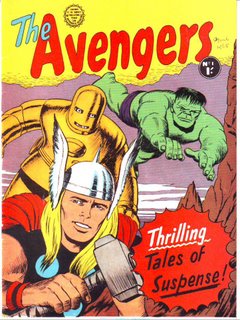 Contents: The Coming Of The Avengers by Lee, Kirby & Ayers
Spaceglider by Bramley

Bramley's Thor might have looked a tad effeminate, yet his Iron Man and Hulk look as good as any other artist of the time, in some cases better. I'm not convinced that Bramley would have sustained a career drawing superheroes, but certainly his skills as a cover artist would have blown the American market away. But then you could say the same about Keith Chatto, Paul Wheelahan and John Dixon to name but three. 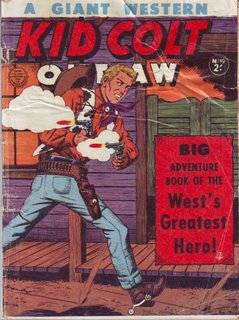 This book is huge and packed with Kid Colt stories by Stan Lee with Jack Keller, Vic Carabotta, John Romita and Joe Maneely. Outside of the cover there's no local content in this issue but the page count and the Golden Age Timely Westerns more than makes up for that. 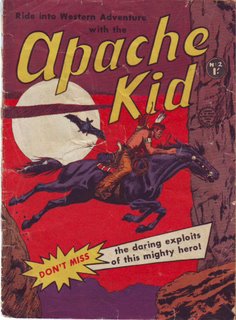 Again, more Golden Age westerns, this time Apache Kid reprints. As with the above, no local content outside of the Bramley cover and it's hidden signature. Bramley had a habit of hiding his signature and disguising it as part of the background. Once you know what you're looking for it's easy to locate. 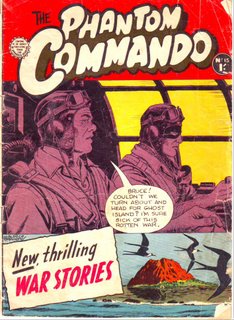 This book was one of John Dixon's creations. It began in early 1959 and Dixon drew it as an adventure style book for the first three issues before he left to concentrate on his better known creation, Air Hawk. Bramley took the book over, moved it away from the adventure style that Dixon had favoured and turned it into a realistic war book and it stayed that way until it ceased publication in 1965. As you'd expect the interior pages shine with Bramley's photo-realistic portraits. This is a title more than worth picking up, if you ever see it.

I'll dig some more of these old Australian comics out of the boxes as I go and scan and post them. Sadly some of my copies (as evidenced by the above scans) aren't the best quality, but hey - better to see a crap scan than none. More to come.

I continue to be amazed with the stuff you come up with. The Strange Tales looks like some lost artifact of the Marvel Era, an unpublished Annual perhaps. This Bramley is quite good. I like the way he just had the Hulk's feet showing from the corner.

Keep them coming. This is becoming one of my favorite sites to visit.