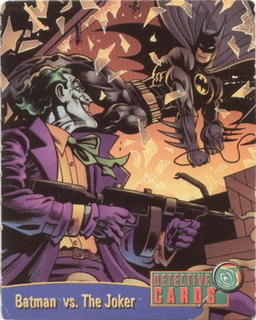 What you're seeing on the blog today are the as rarely seen Detective Cards, as drawn by Norm Breyfogle, that appeared on boxes of Nerds in 1997.

Norm recently emailed me a set of these cards to post into his forum after a number of people mentioned that they'd seen them at some stage. Like the Loch Ness monster, the sightings were infrequent and most people imagined that they'd seen them, but actually hadn't. Norm verified that he had indeed drawn the cards and dug out the copies he had left, scanned them and you can see more of them over at his forum in this thread.

Initially there were eight boxes, sadly Norm only has scans of seven of them and is missing the eighth box, a brilliant image of Robin fighting with Catwoman. If you have a full set of them out there then feel free to email me with high res scans, especially of the missing eighth box. 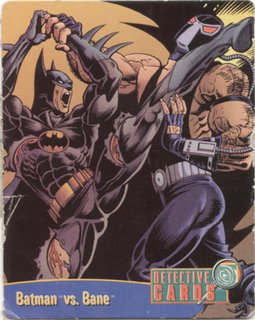 I asked Norm about the boxes, just a few questions as I love to know about these things. Initially I wanted to know just who commissions this kind of product, DC, the Wonka Company? Norm was fast off the mark with that one, "Who commissioned them? DC Comics, as far as I was concerned. I was paid by DC, as they were the ones to hire me for the jobs." As to if the images appeared anywhere outside of the Nerds boxes Norm has no idea. Again, if you know anything different then get in touch.

I then asked how the process works. I've always been curious about how these kind of projects function - does the artist have free reign? Is the artist given directions and specific instructions on what to draw, the layouts and the rest? Again Norm was forthcoming; "An editor contacted me, I produced sketches based on a description, got editorial feedback, then did the final art. Outside of the descriptions and any needed reference for characters (if any), I was given free reign to create whatever I wanted... with editorial feedback. " 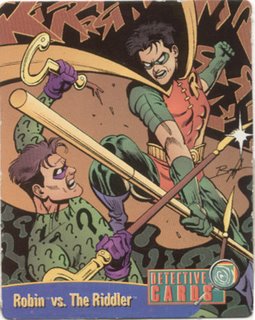 The question has to be asked, why isn't Norm doing more of this kind of thing? I've seen some rather static box art over the years, and some rather pedestrian trading card art. Norm's designs, concepts, layouts and final resulting art are amongst the most impressive you'd want to see. Let's hope someone gets a few copies and wonders the same thing. Now it's time to hunt around on eBay and a few other places and hopefully I'll find a full set of those Nerds boxes with the brilliant Norm Breyfogle Detective Cards. Even better, if anyone has a handle on where some of the original art for these boxes now resides, well make contact and let's make a deal.

If you want to follow this up, or just have a chat to Norm about his comic art and art in general, then pop on over to his forum - he's a great guy and always happy to talk about anything. I kid you not.