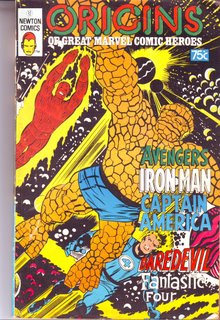 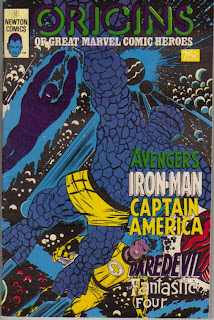 The 'Mighty Avengers' stories were one to two page origin stories that were lifted from the pages of various Avengers comics. The rest of the book was filled with origins of the mainstays of the Marvel universe and as they were short pieces probably wouldn't have fitted into their regular books (the Dr Strange title, as published by Newton, was at that time reprinting the Englehart/Brunner series, not the Lee/Ditko stories).

There is a rare variant copy of this comic in existence. Due to a production problem several issues were printed with a distinct blue and yellow hue. None of these issues were recalled though and several have made their way out onto the open market where they can be found today.

S.Bove said…
Thanks much! I have the original run of the series and refuse to part with it. Seeing the Newton version was very special. You'll have to tell us more about the history of this company.
Friday, July 14, 2006 9:27:00 pm

Anonymous said…
Hi Daniel - Continuing to scroll through your site, when I came across your listing/index for 'Origins of Great Marvel Comic Heroes', which has caused me to doubt my already 'shaky' memory of these old Newton Comics titles from my childhood.

I do recall owning a Newton Comics title, with this same (or very similar) cover design showing the FF flying through space. But the version I recall had a very different two-tone/duotone colour, with lots of blue & purple shades, which lent the artwork a really strange appearance. I can't recall if the actual wording of the title was the same, though!

(I seem to recall it being labelled Newton Triple Action, or something along those lines - but like I say, don't get me to swear on a stack of bibles about this one!)

My other recollection of this comic was that it had a single page/b&w poster featuring Ka-zar, but it was pretty grisly - it was a shot of Ka-zar getting an arrow through his neck! (It would have to have been taken from one of Marvel Comics' 1970s b&w 'adult' magazines, and not their regular comic book editions)

Did Newton Comics use this same cover artwork with the FF on any of their other reprint titles? That would explain why the one I recall had a different colour scheme to the one seen on 'Origins of Great Marvel Comic Heroes'.

If anyone out there can shed any light on this, it might clear the matter up - or raise yet another Newton Comics mystery!

Anonymous said…
Kevin, your memory is correct. My copy of the Origins of Great Marvel Comic Heroes is indeed in a weird dark blue / dark purple colouring.

The printers must have run out of yellow/red/orange at some stage, not that anyone noticed and just kept the presses running.

Neil A. Hansen said…
I made a massive typo. Thes are all Odhams UK reprints. See Australian Reprints for full information, or at least best as I coud acquire.
Wednesday, April 27, 2011 2:43:00 pm

Daniel Best said…
Neil, these are not UK Oldham's reprints. You're getting confused with another comic line. Trust me, these all originated from Australia.

And a lot of the information on the Australian Reprint site was taken from this blog, in regards to Newton Comics.
Wednesday, April 27, 2011 3:01:00 pm