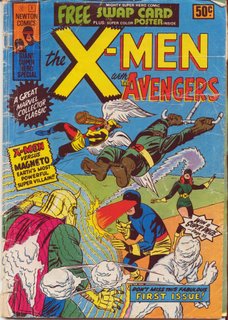 First up, apologies for the bad scan. This is the only copy I have, but I have just purchased another copy of this issue, along with some more X-Men books and hopefully it'll be of better quality.

The idea of grouping together the X-Men and The Avengers was certainly an odd one. The idea behind this was probably to launch the X-Men (bear in mind this was 1975), a series that had ran in reprint mode in the USA and was in the process of being re-launched when Newton was formed. Hence it'd make sense to place a dubious title with a proven seller (The Avengers was a good earner for Newton) and fill in the gaps with stories that wouldn't be printed in the main title. The standard Avengers series ran from July 1975 through to March 1976 and covered at least 15 issues and an annual. The Avengers story in this issue also saw print in the Avengers (Newton) #11 which was issued in December 1975. 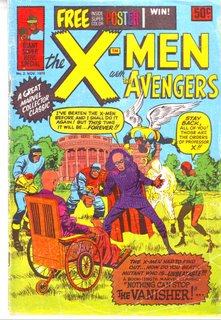 THE X-MEN with THE AVENGERS #2. Published November 1975.
Contents:
No One Can Stop The Vanisher by Stan Lee, Jack Kirby & Paul Reinman (X-Men #2)
Trapped In The Castle Of Count Nefaria by Stan Lee, Don Heck & Dick Ayers (The Avengers #13) 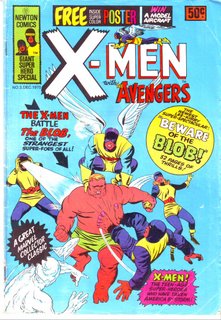 This issue marks the last of it's run as sales must have justified the printing of a solo title. Thus the following issue would see the numbering from this series continue into a solo X-Men title. The Avengers would also continue in its own title.

When all was said and done there still remained at least one issue of The Avengers (#15) that never saw print in any of the Newtons, (or, at least, none that I can locate) 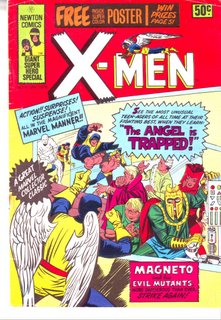 Another great issue, printing three consecutive issues shot entirely from the original stats and uninterrupted. The poster in this issue was of the X-Men with The Avengers #3 cover art.
There were at least two more issues of The X-Men before the title was folded. No cover scans or details just yet, but I presume that those books would have covered issues 8 through to 13. Hopefully I'll have that information by the beginning of next week. 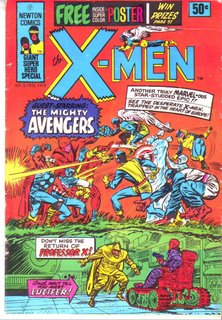 What was unusual for this series is the fact that X-Men #10 was overlooked for this issue.

The poster for this issue was of The Hulk. 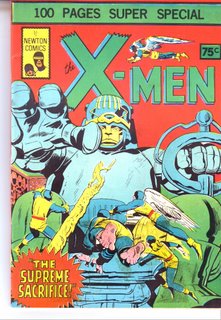 S.Bove said…
With all the excitement about the books I've failed to ask if the Newton’s were popular and successful? Would your source know what an average print run was on a single book?
Tuesday, July 18, 2006 6:09:00 am