July 20, 2006
Today we look at The Silver Surfer, one of Stan Lee & Jack Kirby's most enduring creations. Before we do there's yet another question to answer. Nick Caputo asks, "I'm interested in the quality of the printed books, as you've mentioned they look very good and were printed from stats. Since they are in English, Marvel would be able to use these for reprints. Do you know if anyone at Marvel who has been producing the recent reprint collections knows of these comics? It may be the best quality for them to reprint early Marvel material." The answer is, simply, yes. I had dialogue with Marvel editor Tom Brevoort about the Marvel Essentials line earlier this year. We talked about the quality of the Essentials books and his response to me was that a lot of the raw material doesn't exist for use anymore, hence some stories in the Essentials books are near unreadable. I mentioned the existence of the Newtons, and that the paper quality of a lot of the books were of very high standard, and as they were shot directly from the stats they might be able to be considered as source material. His response wasn't too encouraging, as Essentials are cheap Marvel don't go out of their way to source better quality reproduction material, and as the Newtons were B&W they'd not be considered for Masterworks. Sad really.

However feel free to visit Tom via the links in this post and gently remind him that there's a wealth of material about the place. The Newtons were roughly larger than the average Golden Age comic book, making them at least twice the size of the more common Alan Class (UK) books, and, having seen examples of both books, the Newtons are far and away better quality - the reprinting is clearer and in most cases the paper stock is better. 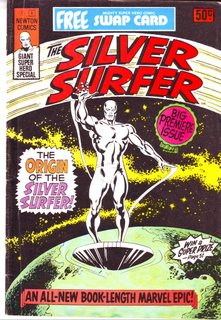 Incredibly over half the entire run of The Silver Surfer was reprinted in Australia, and, for the most part, in order. As the original stories were printed in double-sized books (USA) almost each copy of the Newton SS books contained one story only. The poster and swap-card in this issue were of The Amazing Spider-Man. 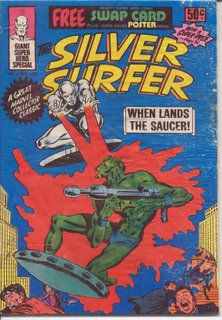 Again, apologies for the bad scan - it's all I have left of this issue (my copy has vanished somewhere). Unusual for the Newton comics of their size, all issues of this run reprinted the original cover art, albeit in freshly colored form. 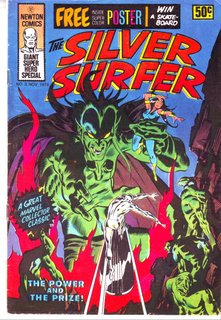 Unlike other 'regular' books the Surfer books actually were issued on a monthly basis. Most others would go bi-weekly and even weekly in an attempt to keep the readers interested. 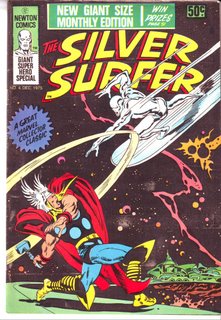 The Good, The Bad And The Uncanny by Stan Lee, John Buscema & Sal Buscema (Silver Surfer #4)

Amusingly the cover ad stated that the book was a 'New Giant Size Monthly Edition' ignoring the fact that the first three issues were also monthly and the same size. A classic example of Newton hype. The poster was of The Amazing Spider-Man. 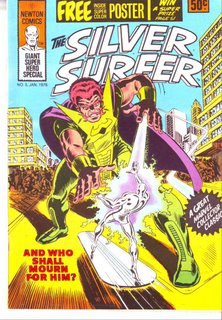 And Who Shall Mourn For Him? by Stan Lee, John Buscema & Sal Buscema (Silver Surfer #5)

The poster was of The Amazing Spider-Man. 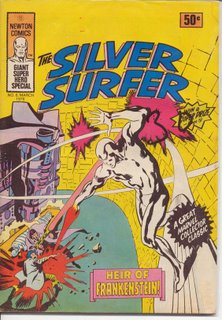 No further details as yet. There was no Surfer book for February due to the temporary shut down of the company, and this issue was released almost as a one-off.

This was the last issue of The Silver Surfer issued as the book was cancelled after this issue. That it'd remained unscathed for as long as it did (six months) was testament to the popularity of the both the character and the title. 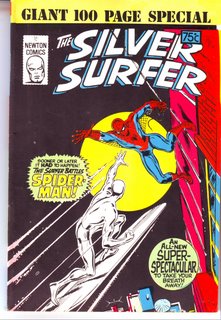 S.Bove said…
Another question is what is the market for comics like now in Australia? I guess Marvel and DC comics are available to you? Was there a Newton equivalent to DC? Love those Surfer books!
Monday, July 24, 2006 4:51:00 am

Anonymous said…
Following up on the lame Brevoort reply, I contributed the first two Thunder Agents archives with black and white copies of stories, in Danish no less.
Monday, January 28, 2013 1:30:00 pm

Unknown said…
What would be the value of these? Thanks