July 16, 2006
Questions about the Newton line are now coming thick and fast. Here's two that arrived via email.

James Kealy asks; "Please excuse my ignorance...But did your Newton Company ever re-print any Superman comics in the 40s and 50s?" Simple answer is no, they didn't. Newton only ever published Marvel comics, which leads us to the next questions, from Mitch Jomsky; "Thanks for showing us those covers on your blog site. Obviously, this company reprinted much (all?) of the early Marvel Comics. The ones I'd be most interested in seeing are the Marvel/Newton Comics that were reprinted with new covers by any of the 'local' talent. If there were any of these, I'd especially like to see the ones that may have been 'homage' covers based on the original Marvel covers. Am I making sense?? I hope so." Mitch always makes sense, unlike myself at times, so here's the answers as best as I can do.

Yes, Newton did publish a lot of Silver Age Marvel material, but not all of the Marvel line, because the Newton line only lasted for a mere 18 months. The line was predominately Silver Age but they did print a vast amount of then contemporary Bronze Age material. The reason for this was that Newton published whatever they could lay their hands on. According to an editor at Newton, who was there from the start to the bitter end, publisher Maxwell Newton flew to America, got in touch with Marvel and established a deal whereby he'd pay royalties for the exclusive right to publish Marvel in Australia. An amount was decided upon, Newton made the initial payment and left New York with boxes of stats or original art, covers and, more importantly, a license to print Marvel. He returned to Australia and started printing and never paid Marvel another cent.

That's right - he ripped Marvel off. It took the powers that were at Marvel a few months to realize this, but in that time they'd sent over more material, including new material such as Planet Of The Apes (which was going gang-busters on TV at the time), some science fiction, Dracula and Kung Fu (Deadly Hands Of Kung Fu) material. Once they knew they were being duped they stopped sending the stats. The lack of new material didn't stop Newton - he simply ordered that previously published material be chopped up, re-shot and mixed in with their existing, unpublished stock, and hence the giant sized Newtons emerged.

Although those issues didn't feature any Australian (read local) talent doing covers, the covers they did make for the comics were unique to Australia. The cover to the Origins comic illustrates this well, as do the following comics I'm posting today. Have a look and enjoy and keep sending down those questions! 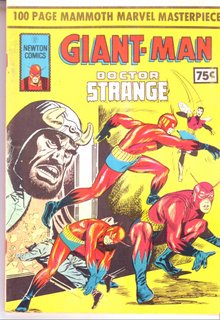 The two part stories were generally done this way so that they could be used as back-up stories in regular issues. That way the one story could be stretched over two issues. Stories from Tales To Astonish were used as back-ups for The Incredible Hulk, Strange Tales was used in The Fantastic Four, Journey Into Mystery appeared in The Amazing Spider-Man, Tales Of Suspense appeared in The Avengers, and other titles used a mix of all of the short stories. 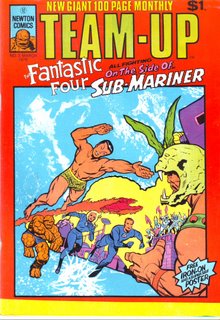 The premium for this issue was an iron-on transfer featuring Daredevil and Spider-Man.

A Defenders title was mooted, but this is as close as it came to being realized. More scans to come along with the information on both the comics and the Newton line itself - hopefully we can lift the lid on a generally overlooked and forgotten (not to mention much maligned) piece of comic book history.

S.Bove said…
I'm getting that old collectors itch again everytime I see that DD #1. This is fasinating stuff. I remember the Atlas line of books (still have one or two around). They were mostly bad but the stories about the company are worthy of a book.
Monday, July 17, 2006 2:20:00 am