July 27, 2006
This post won't offer up any real new information, but it does consolidate the two issues of Iron Man into their own section. 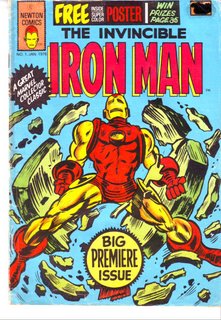 IRON MAN #1. Published January 1976.
Contents:
My Friend, My Foe, My Freak by Archie Goodwin & Johnny Craig (Iron Man #1)
From The Void Of Space Comes The Super Skrull by Roy Thomas, Gene Colan & Vince Colletta (Captain Marvel #2)
The poster was of The Incredible Hulk.

The Thomas/Colan Skrull story also appeared in the previously mentioned Newton Four-In-One. A good example of the recycling process. Iron Man was another short lived title. I can only locate details for two issues - I'd love to discover more but sadly they just don't appear on anyone's radar. 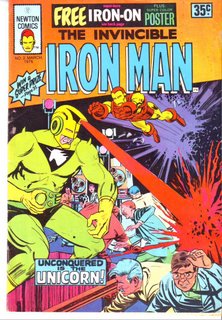 I'd all but given up on ever seeing this issue and I had serious doubts as to if it existed. As the collection I bought was a private one and not one made up of comics from a former dealer or employee of Newton, I now know that this book, and others like it, made it to the newsagents. Coming three months after Iron Man #1 I'm convinced that this was the only other issue in the run. What makes this issue fascinating is the excuse given on the letters page by John Corneille about the shut down of the company. Corneille wrote, "Remember when I mentioned out poor printers just couldn't keep up? Well they finally got so far behind that we had to cease publication for a fortnight until the caught up! So if you have had trouble finding the latest issues then be patient, they will be delayed for a few days." Sadly the delay on the bulk of the issues would be a permanent one and I'm sure that John couldn't state the real reason for the delay - that Max Newton had decided to do away with the comics altogether.

The rest of the message mentions the delays in the Australian launch of F.O.O.M, a launch that never happened, along with delays to Spider-Man #16 (as far as I'm aware it never appeared) and Sub-Mariner #1.

The poster is of The Amazing Spider-Man.