Do You Want To Know A Secret? 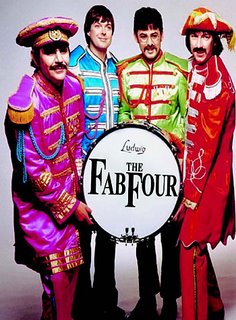 Promise not to tell?

Come closer...The Cavern Club is back in town. We popped down to the Cavern Club on Saturday night due to a birthday party for a niece. Usually I'm not fond of such places - my ears just can't stand bad acoustics anymore - but this time around it went very nicely. The first person we ran into is one of the new co-owners, Graeme. Graeme and myself go a long way back and as I've not seen him for a year or so now it was great to have a decent catch up and chat.

What I discovered was that Saturday night was the re-launch for the Cavern Club in Adelaide. It opened in 2004 and was modeled on the famous Liverpool Cavern Club, but since it's opening it's been a downhill slide. In stepped the Beatles tribute band The Fab Four, Graeme and a couple of investors and off they went, bought the club outright and are setting themselves to have a nice long run. If they can get the food side of things running smoothly then they'll be fine. In fact, let's not talk about the food. Not that we had any, we ate before we arrived, but people we knew, and family, got there at 6:30 for the dinner and show and were tucking into their main courses at about 10pm. I'm told the food was excellent, but it was a long wait. Still, teething problems.

The opening night saw Easybeats legend Stevie Wright perform four songs. It's sad to see Little Stevie these days. He's a wreck of a man, the drug abuse over the years has taken it's toll both physically and mentally, but hey - it was the original Easybeats vocalist up there singing Friday On My Mind. Give the man his due, he sang his heart out even if his voice is now just a pale shadow of what it once was. I think more than four songs and there'd have been problems. I overheard one idiot lamenting that Stevie didn't sing Evie, Parts I, II and III. I mean, you're kidding surely? It's an eleven minute song and I think Stevie might well be dead by the end of it. It was entertaining and the place was full of people, all happy (read drunk) and happy to see Stevie. The long line for signatures on both DVDs and books was heartening to see and I'm sure that Stevie would take a lot away from that.

On another note I've been told that The Cavern will become the home venue of The Fab Four from now on and the place will host The 2006 Australian Beatles Festival from 29 September to 2 October this year. That'll be worth seeing.

Will I go back? Damn straight I will!! I didn't know that Mental As Anything were playing on the Sunday. If I'd known beforehand then I'd have certainly gone. As it is I'll keep an eye on who's playing there and I'm sure I'll pop back down, in fact the Other Half and myself are thinking of having our 80th birthday drinks down there this year (we combine the ages. That way we both feel old) but we'll let people know closer to the time. It's a laid back kind of place, casual and a very relaxing atmosphere. The acoustics are brilliant - it's rare to find a club that doesn't think that the best way to get the sound across is to crank it up as loud as possible and distort the buggery out of it. It was loud enough and clear enough to be made out and it didn't make my ears bleed. And nope, Graeme didn't bribe me with a drinks card for this plug. I'll go back because I had a good night out, stayed longer than I thought I would and ended up feeling seedy the next day - THAT'S why I'll go back.