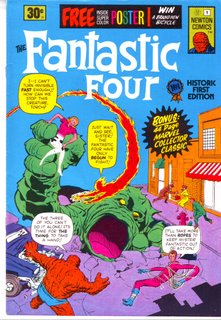 Each Monday I have a day off from work, or so I'm told. What I do, however, is quite the opposite. I work like a bugger really and today is no exception, still I'll be asked if I had a relaxing day when I get back to the day job tomorrow.

Well, nope, I haven't. Sure there's not been any stress in getting to where I need to be to work (upstairs) but the work plan that I had in place for the day has gone right out the door. First up I'd set myself the task of transcribing some interviews - I've done about half a page of that. I've not been able to do anymore than that because the phone has rang (in one case it was Don Perlin - I phoned him though - so I can't complain, plus it's always good to hear from Don), I've had email after email to answer and generally I've been interrupted all the way along. To that end I've settled back and set myself a new task - scanning all my Newton Comics into the computer for a future web-site project. Hang me with a noose if nothing and no-one has interrupted me since I started that task. Someone up there must want me to do this for some odd reason.

The only one who'll bother me now is Merlin, the grey, gay cat, and him I can deal with.

The Newtons I like a lot. I've set myself the task of tracking down and owning each and everyone of the long defunct comic company's books. I'm almost there, not quite, but almost. Out of a known 180 comics I'm only missing around 50 - pretty crap really, but I do suspect that a lot of the issues that I'm missing just don't exist. It's not too bad when I consider that some of the comics that I thought didn't exist, or hadn't seen listed anywhere I now own, so it's possible that I need less than 50 or more. One day I'll know for sure. The Newtons are the main reason why I bought a PDA - I was getting tired of doubling up on certain issues, this way I can go armed with my checklist intact, what I need and what I need better copies of. It's a valuable tool that no-one should be without. Once I have the lot then I'll establish a site, put the cover scans up and share the fruits of my research - some interesting facts there, and frankly it's a story that I've not been able to sell, despite it having some brilliant twists and turns. But one day the truth will eventually surface. I'll start posting some scans here as I go along.

Waiting for a call that's never going to come. Sad really. Back to my scanning and Judge Judy on the idiot box.

S.Bove said…
I'm really interested in this subject! I remember when film or photostats were sent to all corners of the globe just to print comics. In some cases the material was never returned or lost in the mail. Was DD #1 ever printed?