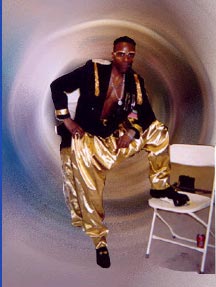 No, seriously - stop laughing. It's not a joke. MC Hammer, or Hammertime as he now prefers to be called, has his own blog and it's HILARIOUS!!! Unintentionally of course.

We're all interested in seeing one famous people - or in Hammer's case, semi-famous, making idiots of themselves as their star fades and the allure washes away. Luckily the former happy pants wearing smiling preacher is no exception. You'll thrill at Hammer's descriptions of the gigs he now does, after touring the world and playing stadium after stadium he's now reduced to playing half time at the local football games. Still, I think it was Chuck Berry who once said, "A gig is a gig and as long as they pay me in cash I'll play." Hammer is living up to that credo.

I don't want to diss ole Hammertime, but his blog must be one of the funniest things out there. I'm glad I've never been famous because I doubt I could take the fall as easily as Hammer has. Mind you surely with some of the cash he's now pocketing (make sure you declare it - again Chuck Berry can tell you what'll happen if you don't pay your taxes) Hammer can afford a decent digital camera? The photos on his site look for all the world to be been taken on either a mobile phone or a 1 megapixel camera. Plus he needs someone who can hold the damn thing steady. But if you like your photos blurred and you don't want to make out much detail, then Hammer is your guy.

So what do we get when we trawl through Hammertime's site? We now know that Hammer supports the war in Iraq (he'd get more press if he came out and called Bush a cracker ass mofo though), his photographic skills are right up there with his songwriting skills and he has a pile of people who think he's God. Oh, and he'll delete any comment that isn't pro-Hammer. That's his prerogative I guess, but it'd make for more interesting reading if he'd allow the comments to come through along the lines of, "Yo, brother, wha th' fu..?" We also learn that Hammer has no sense of spelling and grammar - read this deathless prose and tell me what you get from it. Still, this'd have to be the post of the decade thus far - just for the photo. Whatever did become of Mr T?

It's funny in a car wreck kind of a way, a good place to while away ten minutes while you're scanning, as I've just done. Just be glad the celebrity bug never attacked you - after all the higher you go the further you fall.