June 23, 2020
The Taki Soma situation has reared his head once more, with people questioning the suitability of Charles Brownstein to be heading up the Comic Book Legal Defence Fund. I wrote the words below back in 2006, and I feel that they're still valid now. Nothing of note happened back in 2006, but the world has changed in the fourteen years since, some for the better and some for the worse. What is a constant is that powerful men still appear to be able to get away with whatever they want to.

Perhaps now people will read this and take some action, unlike 2006. 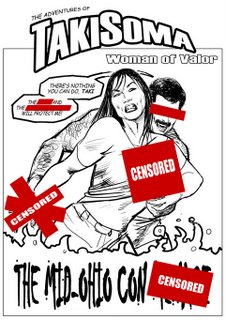 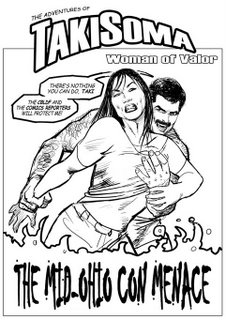 When I first saw both of these images on Michael Netzer's site I was fascinated. I've never been a fan of censorship in any way, shape or form, and for a while I thought that Mike had been told that his initial image - the one on the bottom - was far too offensive for many, and probably borderline slander, which is why he changed it and added the extra bits. Then I realised who this was - Mike Netzer - and I knew that he'd not bowed under pressure, but was making a more powerful statement with the 'Censored' markings. Which one works best? I'll leave that for others to decide. Both are great in their own way, certainly the censored image makes the alleged crime much worse than it probably was.

Which brings us to the following. I'll be the first to admit that I wasn't aware of the Charles Brownstein/Taki Soma situation when it happened. I wasn't there, but I was aware of allegations of a sexual assault that occurred at last years Mid Ohio Convention. However Michael Netzer has been focusing on it, and what he sees as a cover-up about the situation, for a while now. And that makes for some damn good reading. Others have also covered it, to varying degrees, some blaming the victim, some the alleged assaulter, and so forth. The Comics Journal actually did an interesting piece as well, but one thing leaps out at me and has made me think of something that happened here on the weekend.

Much has been made about Brownstein and the fact that (if he indeed did it) he 'only' grabbed Soma's breast for about ten seconds. That's minor in a lot of people's eyes, and perhaps they're right. It was only one ten second grope.

One grope can easily lead to rape if the person elects not to stop or.

Deal with it now, don't cover it all up and educate the public. Pure and simple.