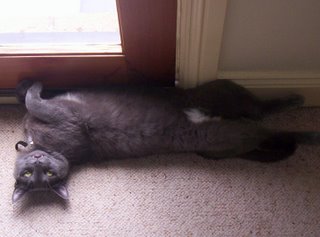 All through Saturday night. Huge storms here. Thunder and lightening, very, very frightening. Hail. High, howling winds. Driving rains. As savage as it's been in a while. Branches blowing around, trees uprooted and falling over. The whole damn hog as a low pressure system crossed the state brining with it the first real winter storms. Damage everywhere.

In the middle of all of this mayhem the idiot you see above woke up, stretched out, yawned and then yowled. Was he scared? Quite the opposite. He wanted to do a Captain Oates and venture forth into the raging storm so he could have a frolic and see if there were any mice about. The fact that only he would be stupid enough to go out in such weather doesn't phase him in the slightest.

So yowl he did, until he got his fuzzy little arse thrown into the laundry. And he thinks I don't care, but it beats me why anyone would give up a dry, warm, safe house to run about like an idiot in a hurricane.

So Richard Carlton is dead. He went out the way he probably would have wanted to - badgering and asking the difficult questions. I have to admit that he wasn't my poster boy for journalism, but his exchanges with Bob Hawke will always be with me. Asking Honest Bob if he had blood on his hands just after Hawke was appointed the leader of the Labor Party was pricess - as was Bob's reply. The thing was, Carlton was right, Bob did have blood on his hands. Still Carlton did get an extra ten years to annoy the crap out of all of us and I'm sure he didn't bother to knock on the pearly gates - he would have just kicked the gates in and ran past with a camera.