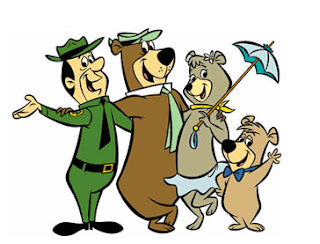 Yogi used to hang around a place called Jellystone National Park and was, for the most part, obsessed by picnic baskets. Like a demented homeless person he relentlessly stalked people, slept on park benches, probably urinated in public, harassed people and stole whatever food and anything else that he could reach. All the time he was pursued by two people, the first being the anal retentive Ranger Smith. Smith was a man so incompetent you could almost see him reaching for the whiskey at the end of each episode. His entire life centered around the pursuit of Yogi. Still, much like the Coyote and the Road Runner, Smith never caught Yogi. The few times he came close then he allowed himself to be exploited - kind of a self-destructive trait that meant he was always doomed for failure. Every good cartoon character needs a Ranger Smith, someone that even a person with the basic level of intelligence, i.e.: the ability to say their own name, could outwit.

When he wasn't avoiding Yogi also spent a good proportion of him time and efforts keeping away from one Cyndi Bear. I've never quite worked out if they were related - same last name and all (or do all bears have the last generic name - Humphrey Bear, Yogi Bear etc. etc.?) - but as it stands Yogi spent a good part of his life avoiding the attentions and affections of Cyndi. And here's where it all gets interesting. Cyndi Bear might not have been the brightest bulb in the box, still she was the only female bear within a hundred mile radius of Yogi. Dressed in some alluring outfits (Yogi was prone to letting it all hang out too - I wonder what would happen if I walked down the street dressed only in a white collar, pie-floater hat and a green tie) but at no time did we see Yogi standing at attention when Cyndi was near. For all her efforts Cyndi never got her bear, mainly because Yogi only had eyes for Boo Boo Bear.

Boo Boo was a younger type bear that wore a little bow-tie and not much else, except for a sly little smile whenever Yogi appeared. Boo Boo is the bear that Yogi ran to when he was avoiding Cyndi. Cyndi would promise Yogi the world, free food, free shelter and, one would presume, free sex if only he'd spend the winter hibernation with her. Each time, without fail, he'd say no. Why?
Because he'd rather spend the long, cold winter months snuggled in a cave with Boo Boo. You can work out why. 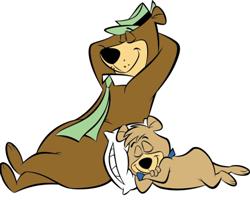 Still, look at this logically: Yogi avoids a female bear, namely Cyndi, in preference to the affections and attentions of one small male bear, namely Boo Boo. He forms a ying/yang kinship with Ranger Smith, albeit incompetent boob, but a person who has enough authority to yell at Yogi and the closest thing Yogi has of a father figure. Yogi's life revolved around two things - stealing and Boo Boo - and the pursual of both. You have to then draw the conclusion that not only was Yogi gay, he was also a sexual predator who wanted nothing more than to manipulate and exploit a bear much younger than himself - almost like Liberace and his insistence that his younger lovers have plastic surgery in order to appear (looks wise) more like himself - narcissism at it's best. 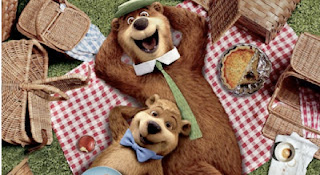 One day Yogi would just come out of the closet and yell "Hey There I'm Yogi The Gay Bear!!!" On that day someone will find Ranger Smith dead from alcohol poisoning, Cyndi Bear will then adopt Smith's role as the park drunk and eventually end up selling herself to anyone with a flagon of plonk or the $2:99 she'll need to buy one and Boo Boo will probably be so shamed by the whole episode that after he succumbs to Cyndi's approaches and loses his virginity to a girl and realises that Yogi, who by now will be holding gay parties for the likes of Snaggletooth, Jabber Jaw, Wally Gator and Huckleberry Hound, has been using him to assert his sexuality at the expense of his own, will go off with Ranger Smith's cache of shotguns and ammo and find himself a nice little overpass out by the freeway........ 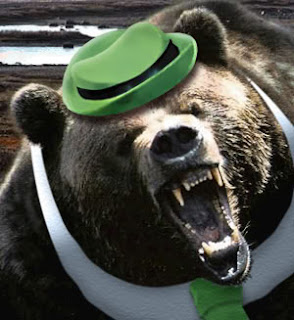 Anonymous said…
I laughed so hard i almost peed myself. But, in all honesty it does make sense. You should write a similar article about Jabber Jaw or Scooby Doo and Shaggy (what's up with Scooby always jumping in Shaggy's arms, besides the fact they're stoners?)
Wednesday, October 13, 2010 12:44:00 pm

Smurfswacker said…
Call me stupid, call me young and naive, call me late for dinner...when I was a kid I always figured Yogi was a single (heterosexual) father and Boo Boo was his kid.

Like most TV fathers of the period, Yogi liked to show off how smart he was to impress his kid. Since he was a blowhard and a hopeless idiot he always ended up running to Boo Boo for help. Boo Boo was, like many TV kids, smarter and more mature than his blundering parent. He let Yogi live in his dream world out of a combination of love and a sense of obligation at least to seem like the lesser of the pair.

As for Cyndi Bear, I'm damned if I remember any female bear during the years I watched the show (which were the first several years it was on TV).
Tuesday, January 04, 2011 4:54:00 pm

Kid said…
AAAAAAARRRRGGGGGHHHHHH!!! Sacrilege! (But funny.) Yogi and BooBoo are but kids themselves, hence Yogi's lack of interst in Cyndi. It's only his stomach he's interested in. Cyndi is the one with the over-developed interest in "relationships". Kids want to play cowboys and indians and other games, but there's always at least one female who wants to play houses. Yogi is definitely straighter than the average bear - but he's still just an overgrown kid. My hero!
Tuesday, January 04, 2011 10:33:00 pm

Anonymous said…
Yogi and Boo Boo sleep together in the same bed. That made me thing they should be gay partners.
Saturday, March 19, 2011 4:39:00 pm

L Bell said…
I thought Yogi was Boo Boos Uncle and Yogi was trying to be a good and providing father figure to Boo Boo, who I assumed was an orphan. I didn't get a creepy vibe from Yogi. It is pic-a-nic food for thought but I prefer my wholesome and innocent scenario.
Friday, July 14, 2017 12:21:00 am

Anonymous said…
Yep, Yogi and Boo Boo were gay and so were Fred and Barney.
"We'll have a Gay Ol Time should have been a big hint.

Anonymous said…
I am only one year older than Yogi bear, but even as a boy, I knew there was something different about him. Yogi was gay, no question about it, and boo-boo was still discovering himself, as he led Yogi into the mysteries of ancient Greece’s man-boy love arrangements. they were gay and they loved each other, but they never had sex.
Saturday, June 20, 2020 1:41:00 am

Jeb said…
Never got this vibe. Sometimes other gay people seem to over stretch to see things in pop culture that were never intended. Yogi just seemed like a bear who thought of nothing but eating and would do anything to get human food. A good way to teach people to be careful and hide your food from bears. Boo-boo was the voice of reason and though younger, smarter. Age doesn't always mean smarter and youth can have smarts too. Boo-boo was a loyal friend even though Yogi had his faults and Yogi appreciated unconditional love from a friend. Nice life lessons.
Wednesday, July 15, 2020 2:32:00 am